​Despite appearing to sustain an injury in the warm up prior to Liverpool’s recent Premier League win against Brighton, Trent Alexander-Arnold played the full game at the Amex Stadium, perhaps to his detriment.

The 20-year-old was subsequently ruled out for a month following the game with a knee injury, as Jurgen Klopp already has to contend with injuries in defence to Joe Gomez and Dejan Lovren, while Joel Matip has only recently returned from a broken collarbone. 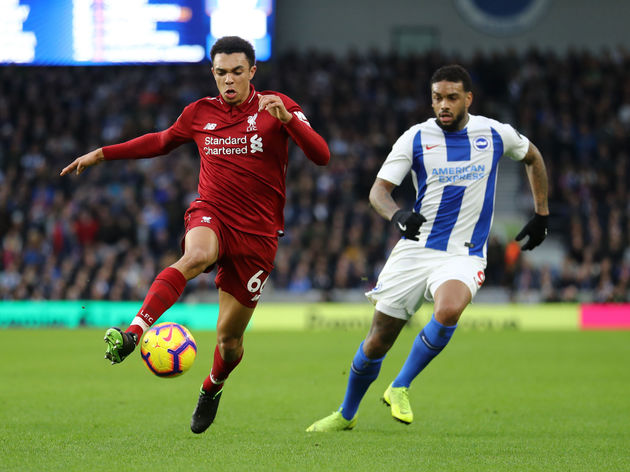 ​News of the injury to the England international hasn’t stopped Klopp suggesting he could feature against Palace however, just seven days after picking up the knock.

Speaking to the ​club’s official website, Klopp said: “Gini and Trent, we will decide day by day. It’s of course not cool.

“The exceptional part of that story is that they both played 90 minutes [at Brighton]. The whole world saw what happened to Trent – what a boy, unbelievable. We played the game and afterwards we got the information that he had [an injury]. “Nothing happened during the game, it was all stable and good. It was just what happened before the game; adrenaline is obviously an interesting thing, it gives you the opportunity to do a bit more than you would expect. We will see.

“For both, it will be really, really close for tomorrow. I don’t want to close any doors before anybody tells me I have to.”

News that Alexander-Arnold could be available for the game at Anfield has certainly got Liverpool fans talking, who have been reacting to the news on Twitter:

3 days ago you said that Trent will be out for 4 weeks???

Looks like Trent Alexander-Arnold could well be fit for tomorrow’s game against Crystal Palace, according to Klopp, despite reports earlier in the week saying he’d be sidelined for four weeks.

Wow! Liverpool have a great physio 👏

Leave him out tomorrow. Next game is in 10 days

While Alexander-Arnold’s part in the upcoming ​Premier League game against Crystal Palace is up for the debate, there was better news for ​the full-back in the shape of a new long-term contract with his boyhood club until 2024.

Alexander-Arnold has become Liverpool’s first-choice right-back under Klopp and has made 22 appearances across all competitions this season, scoring once and providing three assists.

When it comes to playing football, there is only one club for me. After 14 years at @liverpoolfc I am so happy to sign a new contract! Just want to say thank you to the fans for all your support on my journey so far ❤ #YNWA pic.twitter.com/oxMdkwQaeL

​Liverpool can open up a seven-point lead over Manchester City should they beat Palace at Anfield, as the Reds look to claim their first league title since 1989.