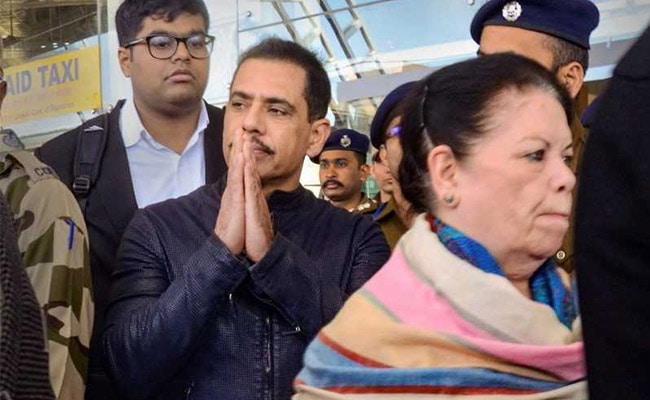 Robert Vadra, Congress president Rahul Gandhi’s brother-in-law, lashed out at what he called a “vindictive government” on Tuesday over the Enforcement Directorate’s summons to his 75-year-old mother Maureen Vadra along with him in a money-laundering case. For the interrogation, the Vadras are in Jaipur, where Robert Vadra’s wife and Congress leader Priyanka Gandhi Vadra also arrived last night. Priyanka Gandhi, who launched her campaign in Uttar Pradesh for the national election with a mega roadshow in Lucknow, is likely to drop off her husband and mother-in-law in a gesture of solidarity, as she had done for Robert Vadra on his first day of questioning in Delhi by the Enforcement Directorate.

“So here we are my 75-year-old mother and me in Jaipur to depose in front of the Enforcement Directorate. Not understanding the lows of this vindictive government to be harassing a senior citizen, who the world knows has lost her daughter in a car crash, her ailing son to diabetes, and her husband as well. Three deaths and all I did was to ask her to spend time with me in my office, so I can look after her and we both could grieve on our losses, while spending time together,” Robert Vadra, 50, posted on Facebook.

“Now she is being accused, maligned and called to be interrogated, for spending time in my office,” said the businessman, who has been questioned for three days by the Enforcement Directorate in Delhi.

Robert Vadra added: “This too shall pass and will make me stronger. What goes around comes around. God is with us!!”

The Vadras were told by the Rajasthan High Court last month to appear before the Enforcement Directorate after they asked the court for protection against any coercive action against them.

The Enforcement Directorate filed a money laundering case in 2015 following the complaint of a Bikaner land official on illegal land allotment in an area considered sensitive as it is close to the border with Pakistan.

The official alleged that government land in 34 villages of Bikaner for army use was bought illegally at cheap rates through forged documents. The Enforcement Directorate wants to question Mr Vadra on the alleged role of a firm linked to him, Skylight Hospitality, which had bought land in Bikaner. The company allegedly sold the land at an inflated price.

Mr Vadra has denied any wrongdoing in the Bikaner case, and accuses the government led by Prime Minister Narendra Modi of targeting him, more so at a time when his wife Priyanka Gandhi has joined politics and will campaign in a part of Uttar Pradesh that includes the constituency of PM Modi.

Mr Vadra was questioned in Delhi on another money laundering case involving the purchase of a property in the UK worth 1.9 million pounds (approximately Rs. 17 crore).