For a player who has featured so few times in senior football, the excitement surrounding Luca Pellegrini is immense.

Not only have Juventus coughed up €22m to Roma to secure his signature, they have also allowed Leonardo Spinazzola to go the other way, signalling their belief in the 20-year-old’s abilities. They have good reason to believe this and, although it may not be apparent now, the fee represents amazing business for a player who looks destined for the top.

The Old Lady’s new man has only made 16 Serie A appearances, with three quarters of them coming for a Cagliari side that survived relegation by the skin of their teeth last season. But in only those handful of games Pellegrini demonstrated a range of talent that will have left observers licking their lips.

This includes his new manager Maurizio Sarri, a coach whose entire footballing identity relies on fast, attacking play, often incorporating the full-backs as part of any progressive move. Marcos Alonso last season for Chelsea, for example, was given full license to roam, often posing as a winger in full-backs clothing. This will all be music to the ears of the young Pellegrini, one of the few modern day full-backs who appears to be steadily competent at both the attacking and defensive phases of the game.

He arguably has this in common with the man he will be playing second fiddle to, Alex Sandro, who will not be easily usurped at the left-back spot. Pellegrini will hope to learn from him and develop into a world-class player.

It has not all been plain sailing for the Italian Under-21 international. His young career has already been blighted by two serious knee injuries, causing him to lose months of his development looking on from the sidelines.

In 2017, as he experienced his last day of Roma’s pre-season training camp, Pellegrini ruptured his anterior cruciate ligament in his left knee. He managed to recover fairly quickly, appearing back in training by the end of the year.

But during his rehabilitation he fractured his right kneecap and was left having to endure more time off the field of play. Many young players struggle to recover after one serious injury, let alone a second in such a small space of time, and it will never be known how much these physical ordeals have hampered his development.

But the fact that he managed to recover on both occasions do, however, signal the robust resilience of the young man and likely convinced Juventus that they were signing a character who does not buckle in the face of adversity. 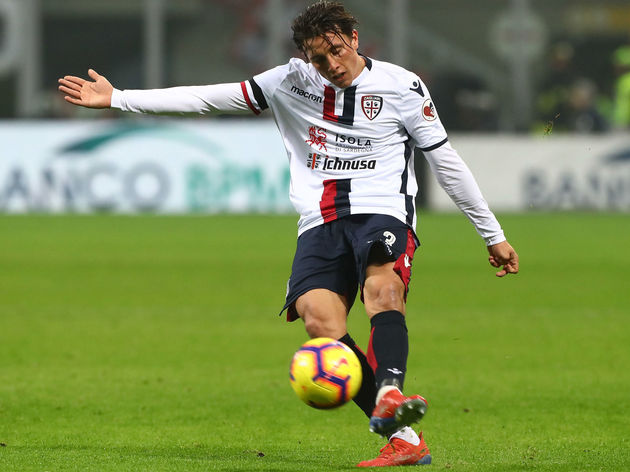 When injuries are not preventing him from being on the pitch, he has a confidence that is very rarely seen in a young player. He never hid in his small collection of games for Roma and Cagliari and would frequently be seen charging into brave slide tackles or going off on a buccaneering run down the flank.

Pellegrini joins a wider revolution in defence. The formidable ‘BBC’ backline which has dominated Italian football for most of the decade has come to an end.

Not only is Andrea Barzagli retired after eight imperious years at the club, but the £67.5m arrival of Matthijs de Ligt means another one Leonardo Bonucci or Giorgio Chiellini may be dropped from the starting lineup, with Sarri extremely unlikely to waver from a 4-3-3, let alone a back four formation.

It is clear Pellegrini is joining a side who are undergoing a surge of change, and under Sarri, he could be given a real chance to shine.

In any case, securing Pellegrini for such small change in the context of the current window will pay dividends for Juventus.

It is a bargain, the best that has been seen this summer, and will almost certainly be seen this way in the years to come as Pellegrini blossoms into the complete player at Juventus.

Walking OR running: Which is better?