​Former Espanyol player and current youth coach Moises Hurtado has called for ​FC Barcelona striker Luis Suarez to be banned for life after he won a contentious penalty in the UEFA Champions League round-of-16 clash against Lyon.

In the first half of ​Barcelona’s 5-1 second-leg demolition of the French side at the Camp Nou, referee Szymon Marciniak awarded the hosts a penalty for Jason Denayer’s challenge on Suarez.

The decision was upheld after a VAR review, despite replays suggesting it was the Uruguayan who fouled the defender.

In a Twitter post published in the aftermath of the incident, Hurtado fumed: “There’s L. Suárez… a player who should be banned for life for always trying to fool the referee – and managing to do so, with and without VAR – leaving his side with one foot in the next round… And [still] no defender puts him into row Z!!!”

This tweet soon became viral and Hurtado deleted it. Here’s the image: 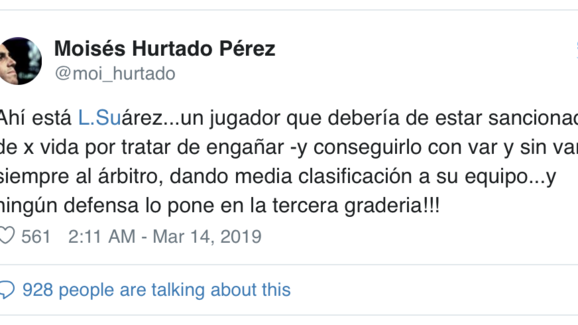 The penalty that was awarded to the Catalan giants was duly converted by Lionel Messi, before goals by Philippe Coutinho, Gerard Pique, Ousmane Dembele and another one from Messi ensured Barca progressed to the Champions League quarter-final for the 12th season in a row.