​Chelsea bounced back from their 6-0 humiliation at Manchester City by putting one foot into the Europa League last 16 with victory over hardworking Malmö in Sweden.

The home side made a high-energy start in an electric atmosphere, but Chelsea’s first clear chance resulted in the opening goal of the game after half an hour. Pedro’s cross found Ross Barkley, who sorted his feet out in time to poke the ball past Johan Dahlin. Malmö responded well and nearly got their equaliser from a goalmouth scramble, but Kepa Arrizabalaga wasn’t tested and ​Chelsea held on to their narrow lead at half time.

Chelsea withstood a short period of Malmö dominance after the break before making the game safe. Barkley drove at the defence before picking out Willian on the left, and the Brazilian’s cross required only the deftest of flicks from Olivier Giroud to double the lead.

Barkley should have made it 3-0 shortly after, but his shot was too central and allowed Dahlin to make a decent save. Pedro also had an effort deflected narrowly wide as the hosts started to tire.

4 – Olivier Giroud is the first Chelsea player to score in four successive games in European competition since Victor Moses in May 2013; a year in which they won the Europa League. Foretold. pic.twitter.com/Y0W00g3Igk

But then, from nowhere, Malmö got a second wind and halved the deficit with a nicely-worked goal. Markus Rosenberg, who had been fairly anonymous, picked out Anders Christiansen with a nice pass and the Dane made no mistake with a good finish past Kepa.

Malmö were visibly exhausted by the end and Giroud nearly took advantage with a late third, but Dahlin kept his side in the tie with another good save.

This wasn’t a classic Chelsea performance by any means, but they got the job done and restored some confidence after last Sunday’s heavy defeat to Manchester City.

Maurizio Sarri will be most pleased by the character of his players to bounce back from that defeat in what was quite a hostile atmosphere, against a team who were playing one of the biggest matches in their recent history. Sarri will also be happy to see Ross Barkley get on the score sheet for the first time since October, a much-needed confidence boost for the Englishman after he was culpable for one of City’s goals last weekend.

Arsenal’s defeat in Belarus earlier on Thursday showed that nothing should be taken for granted in the Europa League, so credit to Chelsea for a professional performance. This competition may be their best chance of getting back in the Champions League next season, so they are right to take it seriously.

STAR MAN – Barkley had a point to prove after his mistake at the Etihad and played a key role in both goals here, tapping in the first from close range before running at the Malmo defence and picking out Willian in the build-up to the second. 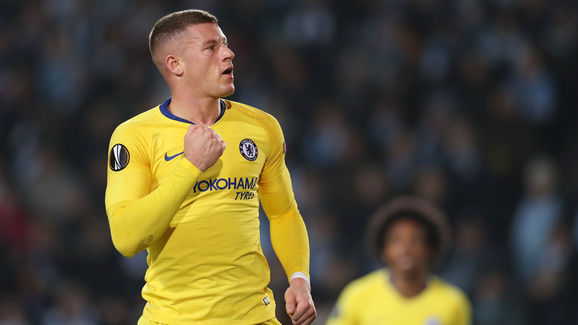 Christensen was at fault for the Malmo goal, scored by his near-namesake Anders Christiansen, as he was outfoxed too easily by Markus Rosenberg in the build-up. He hadn’t been bad up until that point, but it was a costly mistake. Both teams are in cup action this weekend. Chelsea face Manchester United in the FA Cup on Monday, while Malmö host second-tier Degerfors in the Svenska Cupen on Sunday, before the two sides reconvene at Stamford Bridge next Thursday.