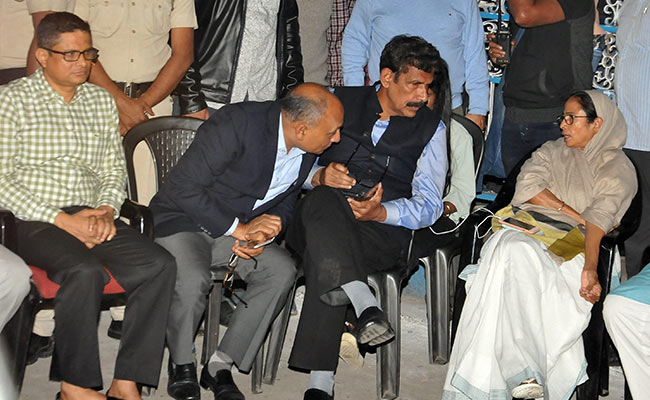 West Bengal Chief Minister Mamata Banerjee dharna or a sit-down protest entered Day 2 in central Kolkata to “save the constitution” after a huge showdown between the police and officials of the Central Bureau of Investigation on Sunday evening. The CBI officers wanted to question Kolkata police chief Rajeev Kumar over two Ponzi schemes, but the CBI officials who turned up at Mr Kumar’s home were taken to a local police station and allegedly detained. “There is total constitutional breakdown. It is my job to protect my officers,” the Chief Minister told reporters on Sunday evening. “They (the BJP) cannot fight is politically. That’s why they are resorting to all this… Mr (Ajit) Doval is doing whatever PM wants him to do, he is the one giving all the instructions to CBI,” she said.

Many Opposition leaders have also spoken out in support of Ms Banerjee. Congress chief Rahul Gandhi had also extended his support for Ms Banerjee. RJD chief Tejashwi Yadav said the state government had to take the move due to “political decisions” the CBI had been taking at the BJP’s behest. He also said he may visit Kolkata today.

The CBI officers, who were released later, are planning to meet the Governor. Ms Banerjee is sitting on dharna at the designated spot for protests in Central Kolkata, accompanied by Kolkata police chief Rajeev Kumar.

Here are the Live Updates of Day 2 of Mamata Banerjee’s dharna:

07:32 (IST)
Here are some visuals of the protest on Day 2, with a large number of people at the venue supporting the West Bengal chief minister: 07:29 (IST)
Apart from Rahul Gandhi and Tejashwi Yadav, Delhi chief minister Arvind Kejriwal, Congress leader Ahmed Patel, National Conference leader Omar Abdullah, Andhra Pradesh chief minister N Chandrababu Naidu also extended support to Mamata Banerjee. A few leaders, including Tejashwi Yadav are said to visit Kolkata today.
07:26 (IST)
Amid the row between West Bengal Chief Minister Mamata Banerjee and Centre, a BJP delegation will meet the Election Commission today at 12:30 pm. Union Minister Nirmala Sitharaman, Mukhtar Abbas Naqvi and Anil Baluni will be a part of this delegation. The BJP delegation seeks to raise complaint over being denied the “democratic right” to campaign for elections.
07:26 (IST)
On Sunday, a row had erupted, when a team of 40 CBI officers turned up at the Park Street home of police chief Rajeev Kumar. The guards stationed there refused them entry and senior police officers rushed to the spot and virtually shepherded the CBI team away from the residence. The CBI officers were taken first to the Park Street police station and then to the local Shakespeare Sarani police station.

Rajeev Kumar was heading the special investigation team probing the Saradha and Rose Valley Ponzi scams that had surfaced in the state in 2013.

Rajeev Kumar was asked to help with the investigation when several key documents of the cases allegedly went missing. CBI sources said he had received several summons for questioning over the last two years.