On the 16th of April 1894, a team known as St. Marks transformed into Manchester City, and this month the Citizens celebrate their 125th anniversary.

The story of City is one of the most fascinating in the history of English football. Forever falling short and always finding new ways of breaking the hearts of their own fan base, the club, and indeed European football, changed forever when Sheikh Mansour bought the club to transform them into one of the most feared sides in the world.

There have been plenty of great moments in the history of the ‘noisy neighbours’, and this could be their greatest yet with the possibility of an unprecedented quadruple still very much on the cards.

Here’s 90min’s list of the 10 greatest moments in the 125 year history of Manchester City football club. When City signed former prisoner-of-war Bert Trautmann in 1949, widespread discontent was spread across all supporters.

However, the German’s performances in goal won over the fans of the Sky Blues, which led to him and the club facing Birmingham City in the 1956 FA Cup final, in which Trautmann suffered a broken neck in the 75th minute.

Amazingly, the keeper would go on to complete the match, with some remarkable saves to help City win the match 3-1, giving the club their third FA Cup. After being relegated in 1963, the future looked bleak, with a record low crowd of just 8,015 at Maine Road to see a First Division match against Swindon.

Fast forward two years, and the club had appointed Joe Mercer and Malcolm Allison as a management duo, and they lead the team to the Division Two title in their first season, mainly thanks to the signings of Mike Summerbee and Colin Bell. Two years after their league title victory, the likes of Summberbee and Bell etched their names further into City folklore when they became part of the only team in the club’s history to win a European trophy.

Following an FA Cup win in 1969, they won the Cup Winners’ Cup after beating Górnik Zabrze of Poland 2-1 in the final in Vienna. City also won the League Cup in the same campaign, becoming only the second English side to win a European and domestic trophy in the same season. 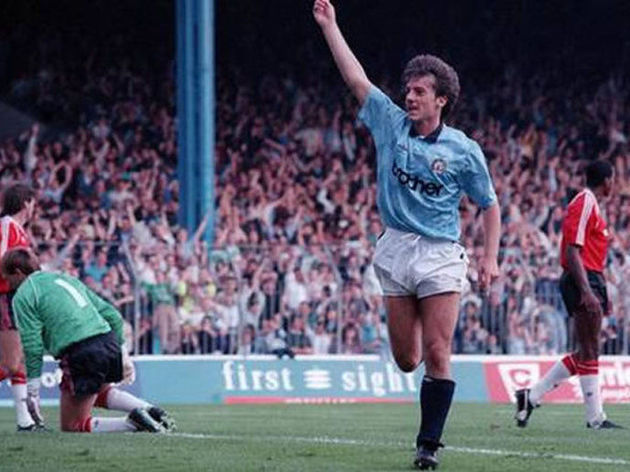 It’s hard to believe that United fans would have ever chanted ‘Fergie out’ at the man who helped transform the club into the juggernaut that they are today, but that’s exactly what happened following the ‘Maine Road massacre’.

Newly promoted City managed to inflict a humiliating defeat on their greatest rivals’ expensively-assembled team, thanks to goals from Trevor Morely, Ian Bishop, Andy Hinchcliffe and a David Oldfield double.

This may have been their last derby victory for 13 years, but fans who were there that day will never forget the time they destroyed their great nemesis with six youth-team players in the starting eleven, in arguably the club’s greatest home performance ever. The club had hit the lowest point in their history when they became only the second side to have won a European trophy to be relegated to their country’s third tier in 1998, just two seasons after dropping out of the top flight.

However, under manager Joe Royle, City were promoted at their first attempt thanks to an extraordinary play-off final win over Gillingham where Nicky Weaver was the goalkeeping hero after a penalty shootout.

City then gained a second successive promotion to return to the Premier League thanks mainly to a brilliant season from striker Shaun Goater. It is not hyperbole to suggest that City were in big trouble in the summer of 2008 under Thai owner Thaksin Shinawatra.

His assets had been frozen, he had strong criminal allegations facing him at home, and the team ended the previous campaign with an 8-1 defeat at Middlesbrough. There was a genuine fear that the Citizens may not be able to keep running due to a serious lack of funds.

Enter the Abu Dhabi United Group, who purchased the club on 31 August 2008, and they’ve never looked back.

Yes, the politics behind it all are questionable at best, but if one set of fans deserved to have the success that they’ve had in recent years, it’s a set whose hope had been relentlessly shattered for decades. The 16th of April 2011 was a huge day in the history of Manchester City. On that day, they beat Sir Alex Ferguson’s all-conquering United team 1-0 thanks to a Yaya Toure winner in the FA Cup semi-final at Wembley.

This result proved that the so-called ‘noisy neighbours’ were so much more than that, and they were here to stay.

Toure again scored the winner in the final against Stoke City to give the Sky Blues their first major trophy in 41 years, which was the catalyst for the success we see today.

Yes, City would have probably achieved that success eventually even if they hadn’t won the cup that year, but this proved to the players and the fans that this City team was here to shake things up for a long time. Sir Alex Ferguson described this as his worst day in management, and it’s easy to see why.

A dominant City team went to their biggest rivals backyard and taught them an absolute lesson, with goals coming from Edin Dzeko, Silva, Sergio Aguero and Mario Balotelli.

This was an absolute humiliation, and the Red Devils’ biggest ever Premier League defeat. City sent a statement on that October day that they were aiming to be the new kings of Manchester. You probably thought of this very moment when you saw the title for this article.

City needed a win against 17th placed QPR to secure only their third league title in the club’s history, but when Jamie Mackie put Rangers 2-1 up in the second half, it felt like the old Man City was back.

That was until Edin Dzeko’s powerful equaliser was followed shortly after by Aguero smashing in a 95th minute winner to steal the title from underneath United’s noses and send the blue half of Manchester into absolute pandemonium.

Arguably the greatest moment in not only Manchester City’s history, but also the Premier League’s.

Winning the League With 100 Points Most people knew that Pep Guardiola was going to change the game when he arrived to English football, but few could have predicted the extent that City would dominate in a single season.

The Citizens became the first side in the history of English football to finish on 100 points, scoring 106 goals in the process.

They were spectacular to watch and arguably the most dominant side in the Premier League era. Guardiola had again raised the bar, and he is showing no signs of lowering it any time soon.

US, S Korea end spring military drills to back diplomacy

Rekha gifted probably the most beautiful sari to Kangana