Defence Minister Nirmala Sitharaman today launched an all-out attack on the Congress and dismissed as “selective journalism” a news report by The Hindu that said the defence ministry objected to the “parallel negotiations” by the Prime Minister’s Office into the Rafale deal. The paper had cited an internal note of the ministry, which said “parallel discussions by the PMO has weakened the negotiating positions by the MoD and the negotiating team”.

“We may advise PMO that any Officers who are not part of the Indian Negotiating Team may refrain from having parallel parlays with the officers of the French Government,” the cited note read.

As the Congress claimed it supports its contention about the interference of the PM’s Office in the deal, Ms Sitharaman tore into the report, calling it “slanderous” and “irresponsible”. 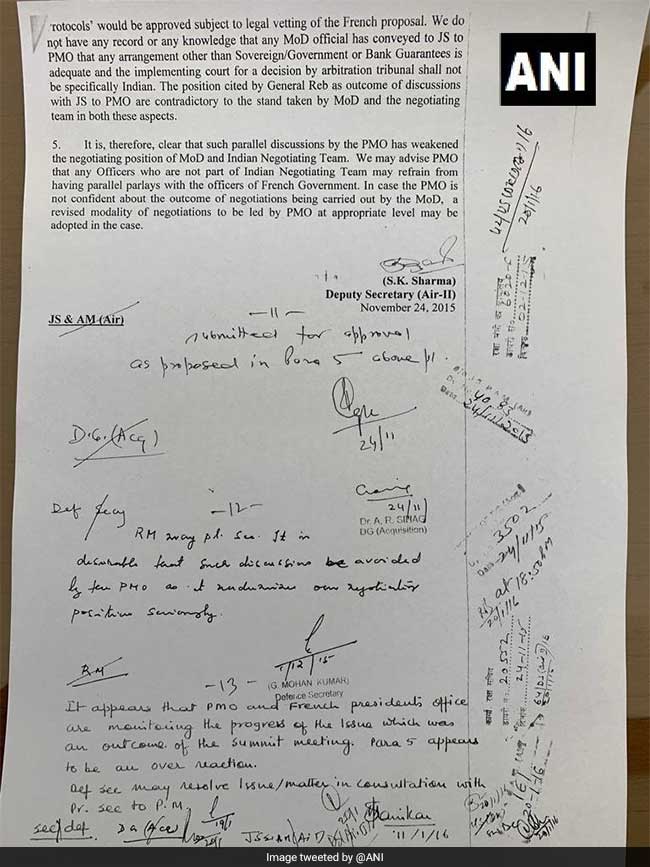 “Then Defence Minister Manohar Parrikarji replied to that MoD note that ‘remain calm, nothing to worry, everything is going alright,” Nirmala Sitharaman said

Mr Parrikar’s handwritten remarks at the bottom of the report said the PMO and the French President’s Office were “monitoring the progress of the issue which was an outcome of the summit meeting”. The concerns expressed in paragraph 5 of the note of then defence secretary, G Mohan Kumar, “appears to be an over-reaction”, the minister wrote.

Ms Sitharaman had made her position clear in the Lok Sabha too. “If the newspaper wanted to bring out the truth, they would have approached the defence ministry and done a thorough check. They would also have approached the then Raksha Mantri (Parrikar) for his views on it. The said paper has gone ahead and published a report without any facts to back it,” she said.

A call for updates by the Prime Minister’s Office cannot be termed interference, Ms Sitharaman told the media. “Interference is what Sonia Gandhi did with not just all the ministries, but the PMO too. That is what is called interference,” she added.

The Congress shot back:

Nirmala ji, stop pretending like you don’t know that negotiating directly with the French govt is not ‘supervision”, but interference which violates DAC guidelines as illustrated by the note written by your own ministry. #PakdaGayaModihttps://t.co/cCfPlQB2M2

The PM and by extension everyone that covers up for him (@ArunJaitley, @manoharparrikar & @nsitharamn) are complicit in this scam that stole Rs 30,000 crore from the Indian public & put it in Anil Ambani’s pocket. #PakdaGayaModi

The minister also attacked the Congress, which renewed its demand for a joint parliamentary committee investigation into the Rafale deal.

“Lastly, look at the kind of language and intent Rahul Gandhi has stooped to… Calling the PM Chor, and me all sorts of names was one thing… but today he was trying to create a divide between the armed forces and the country’s leadership… between the service chiefs and the prime minister… This is deplorable,” she added.