​Juventus manager Massimiliano Allegri has indicated that defender Medhi Benatia has been ruled out of Wednesday’s Supercoppa Italiana encounter against Milan, following the 2-0 victory against Bologna.

The Morocco international, who was set to appear in the Bianconeri’s Coppa Italia Round of 16 tie at the Stadio Renato Dall’Ara, was replaced by Giorgio Chiellini within minutes of kickoff after picking up a knock in the warm-up. Allegri, whose side ​booked their place in the quarter-finals of the competition, commented on The ​Old Lady‘s defensive frailties, which included injuries to Andrea Barzagli and suggested that Benatia would be joining the veteran Italian on the sidelines.

As quoted by ​Football Italia, Allegri told Rai Sport: “Benatia got hurt with a groin inflammation in the warm-up, so he won’t take part in Jeddah. We’re already without Andrea Barzagli, but hope to have João Cancelo back.”

Juventus take on the ​Rossoneri for the third time in Italian Supercup history on Wednesday, with both sides having won a game each. The previous two encounters were decided by penalties, the last of which saw the Bianconeri beaten by Il Diavolo, and Allegri insisted he was keen to avoid the same result. 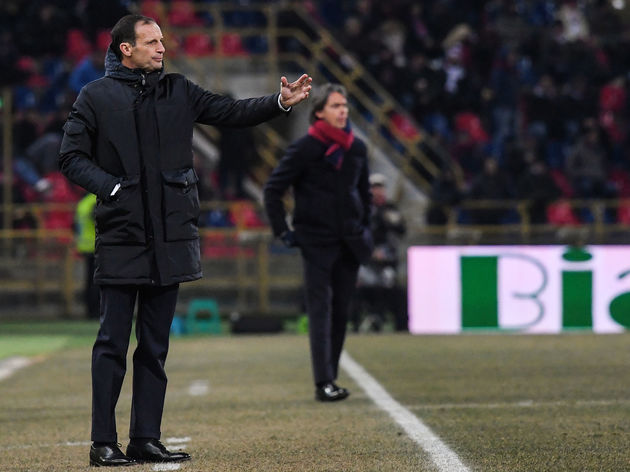 He said: “Wednesday is a one-off match, we already lost to them before on penalties, so hope to at least not go through extra time and penalties. We’re ready to play.”

In Saturday’s encounter, Moise Kean scored the decisive second goal to send Juve into the next round after Federico Bernardeschi capitalised on an error from Angelo da Costa to put the 13-time winners in front, and Allegri was pleased with the team’s performance, considering it was their opening match of the calendar year.

Allegri added: “I am satisfied with qualification, as it wasn’t easy to win at Bologna in our first game after the winter break.” Allegri was impressed by the duo’s display and suggested it was crucial that they performed, as a result of the injury to usual centre-forward Mario Mandžukić, who missed the match with a thigh injury.

“Kean is young, he needs to grow, but he did well. Leonardo Spinazzola also had a good performance after a long injury lay-off,” Allegri said.

“Bernardeschi was visibly back in shape both physically and psychologically during training. With Mandžukić out at the moment, all these players become important.”