​Tottenham manager Mauricio Pochettino has admitted that he could use Dele Alli as a makeshift striker in a similar way to Lionel Messi at Barcelona, in the absence of Harry Kane.

The north London club are without star striker Kane until early March after he sustained an ankle injury against Manchester United, while Son Heung-min is away on international duty for South Korea for the Asia Cup.

With their options somewhat depleted up front, Pochettino – who was recently in attendance during ​Barca‘s 3-0 win against Levante in the Copa del Rey where ​Messi played as a ‘false nine’ – suggested that ​Alli could operate in a similar role to that of the five-time Ballon d’Or winner. 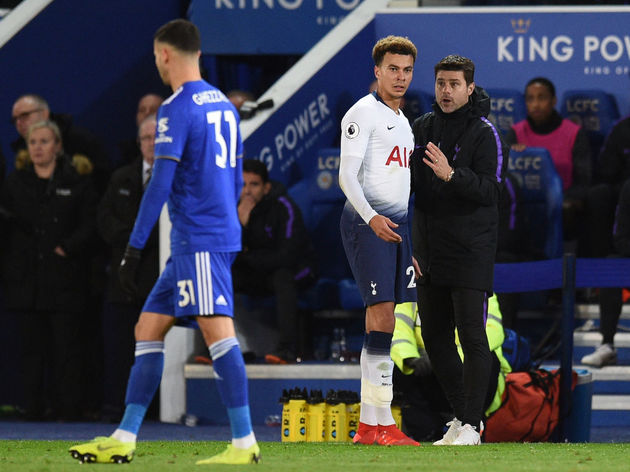 As quoted by ​The Mail, Pochettino said: “I was watching Barcelona and the striker was Leo Messi.

“Look, Chelsea played against us with Eden Hazard like a striker, when Olivier Giroud was on the bench and Alvaro Morata was out of the squad.”

Alli, still just 22, has now scored as many career goals as Steven Gerrard had at 27; the fearlessness and impetuosity honed in the third tier complemented by blindingly quick feet and an eye for the outrageous. pic.twitter.com/nlixsI3UtL

Despite only being 22 years old, Alli, who has four goals and six assists in all competitions this season, will shoulder a lot of the pressure for Spurs in an attacking sense in the absence of both Kane and Son, although Pochettino insisted the midfielder has already proven he can manage the expectancy placed on him.

He added: “He is one of the most exciting youngsters at his age. He is one of the best, if not the best. All that he has achieved, it is amazing when you compare it with other players. I think the contribution of Dele Alli is massive in the last few years. Massive.

“After the Tranmere game in the FA Cup, all the headlines were for Fernando Llorente. I need to give Llorente the opportunity to play, no? I am not going to worry about that.” Next for ​Tottenham is a London derby away to Fulham this weekend, and could find themselves fourth in the Premier League by the time they kick off should Chelsea win against Arsenal.

The Reason Why Mike Phelan Has Not Yet Committed to Man...

Would you slap yourself for good skin?