​Tottenham manager Mauricio Pochettino praised his ‘fantastic’ side following their ​3-0 win over Borussia Dortmund in the first leg of the Champions League tie, while also claiming people ‘underestimate’ his squad.

Second-half goals from Son Heung-min, Jan Vertonghen and Fernando Llorente capped a memorable night for the north London club, putting them in a terrific position to reach the quarter-finals ahead of the second leg on March 5.

​Spurs were able to beat the current ​Bundesliga leaders without key duo Harry Kane and Dele Alli, with Pochettino delighted to come away with the win despite missing the attacking pair.

Speaking after the match, as quoted by ​Sky Sports, he said: “It’s good because the expectation when people watch Tottenham is not only to win, it’s to see a performance like the dream team of Barcelona with [Johan] Cruyff or Milan of Arrigo Sacchi.

“That is very good, we feel very proud when people expect that from our performance, but sometimes people underestimate us.

“We play much better than people assess us sometimes, but you cannot fight with the perception of people. I am happy with the performance and the circumstances we have.”

Tottenham have become something of a second-half team in the Champions League this season, with 11 of their 12 goals in the competition coming after the interval, as Pochettino admitted his side had to improve after half-time, especially with ​Dortmund looking the better team in the opening 45 minutes.

He added: “The first half was very difficult. Our feeling was we never felt the confidence to play. We made some rushed decisions, we were not comfortable and didn’t feel how we planned to play.

2011 – Tottenham are the first English side to win their home leg of a knockout tie against German opponents in the Champions League since Man Utd in the 2010-11 semi-final vs Schalke. Dominant. #TOTBVB

“But after fixing some problems and showing some clips at half-time and talking different positions in offence and defence to try to help the performance, with a little bit of luck – because confidence is a massive boost when you score – that helped the team perform much better.

“It’s a massive victory and the players deserve all the credit because they were fantastic.”

While Tottenham are in excellent position to reach the quarter-finals of the Champions League for the first time since 2011, Pochettino is ignoring any notion that the tie against BVB is already over. 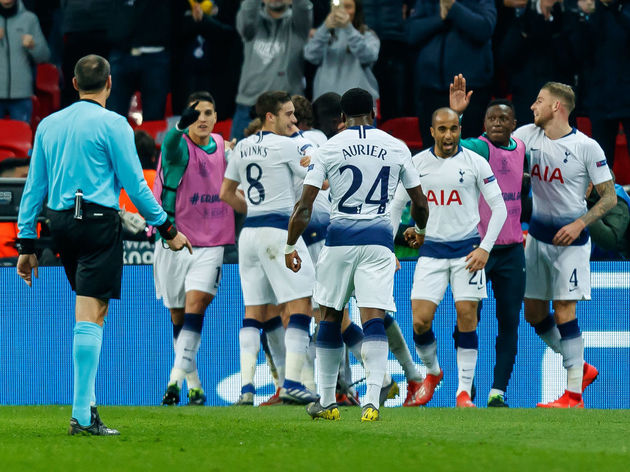 He stated: “For me, it’s only the first leg and first half of the tie. Of course we are happy now because it’s a good result but there’s still a lot of work to do.”