There is something distinctly Arsenal-esque about the difficult period Tottenham have just endured. In the dog days of Arsene Wenger’s reign, it was around this time of year that things always started to fall apart. Title hopes hanging by a thread, chances of silverware dashed for another year. All that remains is the inevitable Champions League humbling.

Defeat on penalties against Chelsea in the EFL Cup semi finals followed three days later by an FA Cup exit to Crystal Palace leaves Tottenham staring down the barrel of another trophyless season. To go out of one cup competition in a week might be seen as misfortune; to go out of both looks like carelessness, as Oscar Wilde might have said.

Mauricio Pochettino has caused quite a stir in the wake of this wretched week by suggesting, not for the first time, that trophies are not top of his priority list. Were these not the same sentiments that ​Tottenham fans had mocked Arsene Wenger for expressing just a few years before? “We are going to create a debate that to win a trophy will take the club to the next level,” said Pochettino. “I don’t agree with it. It only builds your ego. The most important thing for ­Tottenham right now is to always be in the top four.”

Pochettino has since admitted that ego was the wrong word, but the damage is done. Opposition fans will continue to mock Tottenham for being the brave bottlers; the noble nearly men; the fighting failures. A losing mentality, seemingly endorsed by the very man who is supposed to be leading them to success.

Yet all that Pochettino has done is to overtly acknowledge what every other Premier League manager implicitly admits with their FA Cup team selections: cup competitions don’t really matter any more. They’re a nice bonus if you can win them, but a club’s long term prospects are much more dependent on consistency in the league.

Take ​Liverpool for example. Since he was appointed manager in 2015, Jurgen Klopp has treated the domestic cup competitions with disinterest bordering on disdain. The Reds have never been beyond the fourth round of the FA Cup under Klopp, and this season crashed out at the earliest possible stage of both competitions for the first time in eight years. But in the last two seasons, Liverpool have finished in the top four by a narrow margin on both occasions – five points last year, one point the year before. One or two results could have cost them their place in the Champions League, and greater exertions in the cup competitions might well have had a knock-on effect on league performance.

Consistency over the course of several seasons has allowed Liverpool to reach the stage where they can challenge for major honours. There have been disappointments under Klopp, including three cup final defeats, but if that Premier League trophy has red ribbons on it in May, nobody will care about the sacrifices made along the way.

JK on Pochettino’s assertion top-4 is more important than cups “We need money for improving a football team. I know people probably didn’t like what Poch said but best competition to win is the @premierleague. Other competitions don’t generate same money.

Pochettino is trying to do the same thing at Tottenham as Klopp has done at Liverpool, and had he been given £150m to spend last summer, the chances are that Spurs would be neck and neck with the league leaders. But the construction of the new stadium took priority – another short-term sacrifice made for long-term gain.

If you want to know why neither Pochettino nor Klopp cares about cup competitions, look no further than the last managers to win trophies for Tottenham and Liverpool. Juande Ramos was sacked within eight months of winning the League Cup in 2008; Kenny Dalglish barely lasted three months after winning it in 2011.

For a current example, compare Pochettino with the man whose team knocked Tottenham out of the EFL Cup last week, Maurizio Sarri. His ​Chelsea team are Wembley bound, but there is a significant chunk of the club’s support which has already lost faith in the Italian because of poor league results. 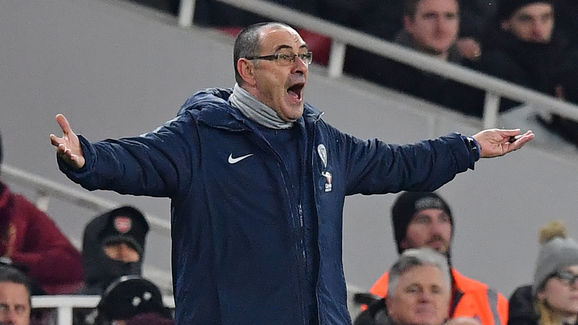 Chelsea is a club which demands instant gratification, winning trophies at a prolific rate but never sticking with a manager long enough to develop loyalty or an identity. No club is better built for an era of football which prioritises short-term success over long-term legacy.

Tottenham don’t want to be that club. When success eventually comes, they want it to be maintained and built upon by the same manager and the same set of players. In Pochettino, they have a manager who believes that good things come to those who wait.

This week’s Premier League results have left Tottenham just seven points behind Liverpool and just two behind City, with visits to Anfield and the Etihad to come. The time is coming when Pochettino must deliver on his promise of success, and it may be sooner than you think.

Johan Cruyff: The Visionary Who Became the Most Important Man in...

FA Cup League Table: The 10 Teams With the Most Wins...