​Chelsea manager Maurizio Sarri was left frustrated after VAR granted Tottenham a decisive penalty in their 1-0 loss in the Carabao Cup on Tuesday night.

On a largely frustrating evening which saw both N’Golo Kante and Callum Hudson-Odoi strike the woodwork, Harry Kane’s clinical first half ​spot-kick separated the sides – but not without controversy leading up to the game’s only goal.

Despite initial replays from VAR showing the ​​​Tottenham goal-scorer in line with the Blues’ defence, another version on Chelsea’s club camera footage appeared to show Kane in an off-side position – before being upended by goalkeeper Kepa Arrizabalaga.

Speaking post match to reporters via ​skysports.com, Sarri criticised the decision that left his ​​Chelsea side needing to overturn the ​​deficit in a fortnight when the second leg of the semi-final takes place: “We deserved more because in this match we played better than the opponents. We were in control of the match and defended well against a team dangerous in the offensive phase, so we deserved more.”

Point of VAR is to help referees make better decisions. Using an angle that’s actually worse than the assistant’s – who got it right first time – to then overrule him is really not the way to do it. Sarri right to feel aggrieved.

In November 2018, Premier League clubs agreed in ​principle to allow the introduction of VAR in the forthcoming 2019/20 league season.

Having experienced VAR with Napoli in Serie A last season, Sarri suggested the inexperience of English officials was to blame.

“In Italy there is VAR and in the first period it was a disaster, it was really very difficult for the referee to get used to the system and I think here the referees are not ready to use it in the right way. 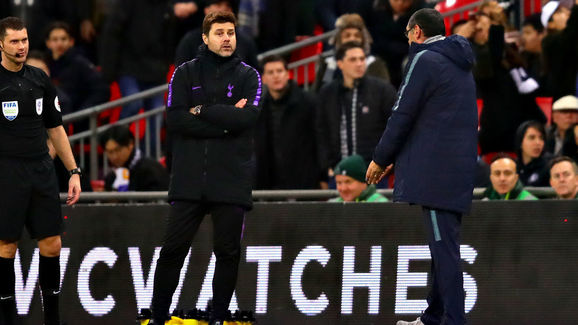 “It is strange in the Premier League there is not this system and then in the Carabao Cup there is suddenly the system. At the moment I think the English referees aren’t able to use the system.”