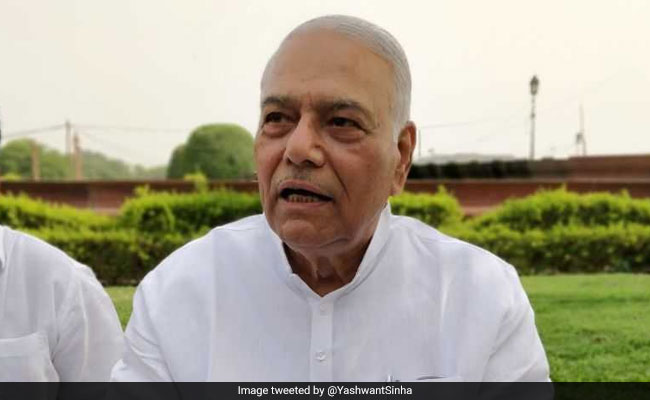 The two-time finance minister was asked to suggest his dream roadmap for creating jobs, at a session organised as part of Shri Ram College’s Economic Summit at the Delhi University.

“You talk about 1.2 crore jobs. I would like to talk about the millions of kilometres of roads that we have to build, all that we need to do for agriculture, irrigation projects, storage processing, and all that and you know new townships to be created – there is so much work to be done that when we start doing that work we will create not 1.2 crore jobs but two crore, three crore jobs every year but we are not doing that, that’s the problem, so we will have to find somebody who is prepared to buy this theory,” said Yashwant Sinha.

Who is the person, he was asked. Nobody, he replied at first.

Who comes closest? “The closest is me, myself,” Mr Sinha chuckled, and the audience also laughed. So did Left leader Sitaram Yechury, who said he was “very close behind” Mr Sinha, a BJP rebel who quit the ruling party in April last year.

Mr Sinha was also asked about the possibility of Nitin Gadkari being that candidate, given that there had been some buzz around the union road transport minister recently.

“There is no hope in hell for that,” Mr Sinha responded. “Why I am saying it is, because I know the kind of vice-like grip the current prime minister (Narendra Modi) and the party president (Amit Shah) have over the BJP and even after the loss of elections where they could be below 200, they will not retire from their leadership.”