CES is that time of the year when every technology company waits to show off their most innovative and wacky creations. Before CES began, rumours were rife that foldable smartphones would make a big splash at this year’s trade show and while we didn’t get to see anything from some of the big names like Samsung or LG, attendees were treated to the FlexPai, the world’s first commercially available foldable smartphone from a company called Royole.

The phone is based on the company’s own flexible AMOLED display technology and the phone officially launched October last year in China. Now, Royole plans to bring the FlexPai to the US market by end of March, according to Florent Meng, Brand Director of Royole.

The phone that was shown off at CES 2019 were the developer units, so the software had quite a few bugs. but at least we got a glimpse at what life would be like with a foldable phone.

Unlike the ZTE Axon M, which essentially had two displays joined together by a hinge, the display on the FlexPai actually folds outwards, which is a pretty cool sight you see it happening for the first time. When it’s unfolded, the phone acts as a 7.8-inch tablet.

The display itself looks good, with vivid and punchy colours and we found the touch response to be very good too, especially for a developer unit. Royole claim that the display has been designed to withstand bending over 200,000 times.

In tablet mode, the display does not sit completely flat and you can see and feel a slightly bump in the middle, where the screen bends. It’s very mild, but it’s there. 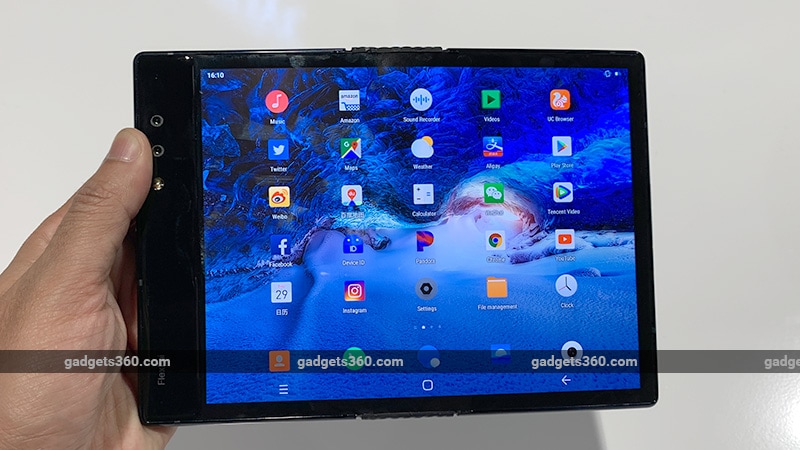 The 16-megapixel and 24-megapixel cameras, both face forwards. To take a selfie, the FlexPai needs to be in tablet mode and if you want to take a regular photo, you need to fold it, so the camera faces the back. The phone has a USB Type-C port, a dual-SIM slot with the option to expand the internal storage, a power button with an embedded fingerprint sensor and volume buttons.

The FlexPai essentially has two halves, with a giant hinge in the middle. One side houses the electronics while the other has the 4000mAh battery.

There are magnets at the edges of the two halves which hold the FlexPai in place and prevents it from opening. The phone can also only be folded in one direction and not both. We have to say, this folding and unfolding procedure does take a bit of effort. It’s not something that can be done with one hand and even when folded, the two halves don’t sit flush on top of the each other, since the tolerance for bending the display has its limits. This leaves you with a pretty big curve which kind of reminds us of the way the hinge of the Microsoft Surface Book looks when folded. It’s not the easiest to fit into your pants pocket either.

Meng says that the FlexPai should start shipping in other countries by end of March or early April, with an expected starting price of roughly $1,600 (around Rs. 1,12,000). When asked about it’s arrival in India, Meng told Gadgets 360 that they do consider India as a important market and that the company is still figuring out local distribution partners, so fingers-crossed, you might just see this on store shelves this year itself, if things work out. 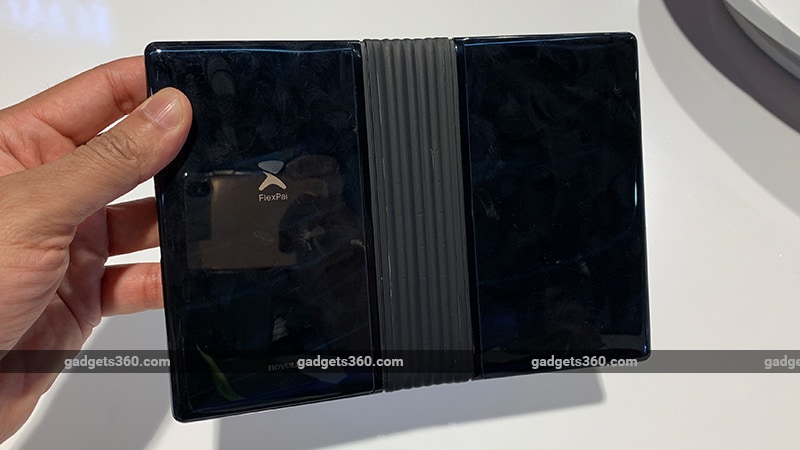 Are flexible smartphones the future or just a passing fad? It’s hard to say right now considering we’re still in the very nascent stages of flexible display technology and not to mention, the new form factor which everyone needs to get accustomed to. However, flexible OLED technology has come a long way from being just a gimmick and the FlexPai is the first product that you can actually buy, which makes it special.

We’ve seen flexible OLED displays on products before but those are already pre-bent into a desired shape. The FlexPai is one of the first products that lets the user manipulate the form of the display. With top players like Samsung jumping on the foldable phone bandwagon, we might see big advances in this technology really quickly.

As for the Royole FlexPai, it’s a very interesting concept that actually seems to work, but we don’t see people lining up to buy it just yet. It looks cool and is definitely an attention grabber when you fold or unfold it, but the design isn’t the most practical.

It’s fairly bulky when folded so it’s not going to be easiest to slip into most pants pocket and the whole transformation process is a two-handed job, which means ergonomics is bit of an issue too. Also, in order to answer a call, you’ll need to fold the phone to be able to comfortable hold it up against your ear.

The Royole FlexPai gives us a first real look at what life would be like with a foldable smartphone and even though we’re not entirely sold on this concept of mobile computing just yet, it has certainly set the ball rolling for what smartphone of the future could look like 10 years from now.