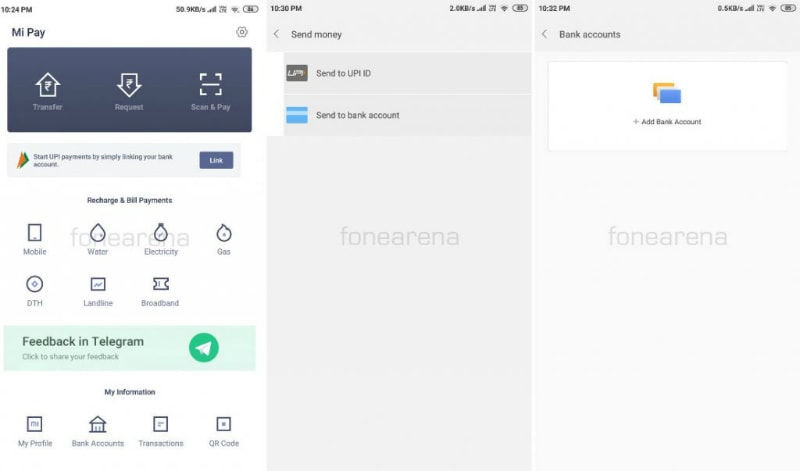 Xiaomi announced its plans to start testing its payments service in India in December last year to counter the likes of Google Pay and other similar services. The company partnered with ICICI Bank and PayU to launch Mi Pay in the country, and even confirmed that National Payments Corporation of India (NPCI) had cleared Mi Pay for large group testing. Now, Mi Pay 2.0 has reportedly arrived with the latest MIUI 10 Global Beta ROM update. In its earlier testing, Xiaomi had integrated Mi Pay natively in Settings, but the latest beta update brings Mi Pay 2.0 in the form of a standalone app.

The Mi Pay app arrives with the latest MIUI 10 Global Beta ROM update and was first spotted by FoneArena. The report states that the UI is basic and asks for Phone, Contacts, and SMS permissions after being installed and booted up. The app allows for UPI transactions, and doesn’t list any rewards or promotions just yet. The Mi Pay app is still in testing and it may bring rewards and promotions once it’s live for commercial usage. The app is available only for Indian users, and the Mi Pay APK is available for download for all those who wish to give it a try.

When Xiaomi had launched the service last year, Xiaomi said that Mi Pay in India will enable transactions using the UPI PIN and the virtual payments address (VPA). It will let users make payments by scanning QR codes, including Bharat QR codes. The platform will also generate personal static and dynamic QR codes to receive payments from other users via UPI. Further, you can link or unlink your bank accounts at any time, manage your bank account, and check the current balance in your account directly from the platform. There will also be an option to modify or reset the UPI PIN for your bank account.