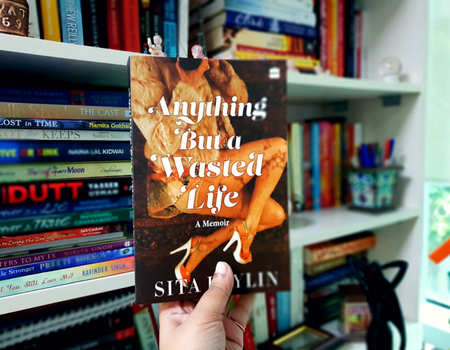 California-based author Sita Kaylin is anything but ordinary. A pre-Law graduate and former sex worker, Sita Kaylin has chronicled her outrageously adventurous life in the memoir Anything But a Wasted Life. This is an autobiography of a passionate stripper and a woman who wants people to love her the way she is, for she chooses to be unapologetic for her decisions in life.

Anything But a Wasted Life is not simply a dark, nuanced exploration into the sex industry. It primarily tells the story of a woman’s arduous journey to personal independence, and the positive outlook that helped her brave through times that others would crush under. Kaylin was 16 when she left home and started working odd jobs after dropping out of high school. After graduating pre-Law, she was introduced to stripping to ease off the financial pressure. But finding little time to study, college never materialised and Kaylin’s life revolved around getting naked around strangers and faking intimacy for a living. As a former sex worker, Sita Kaylin speaks about things we wouldn’t want to believe — like how women customers get more demanding to strippers, even if they’re heterosexuals; or the time when she got intimate with a stranger for the first time because she just couldn’t refuse the huge amount of money he offered.

Kaylin’s narrative is lucid and her voice, conversational. She is not the typical foul-mouthed stripper we see in movies, but a woman who doesn’t sway from her agenda — money. For a book that illustrates the life and adventures of a former sex worker, Anything But a Wasted Life has an aesthetic tone one wouldn’t generally expect. Besides personal desires, Kaylin touches upon human needs, modern relationships and mental health, making her memoir an interesting read.

Boris Johnson puts his feet up in Macron's palace

Adrien Rabiot Asks Juventus for 'Cooling Off Period' Amid Reports of...