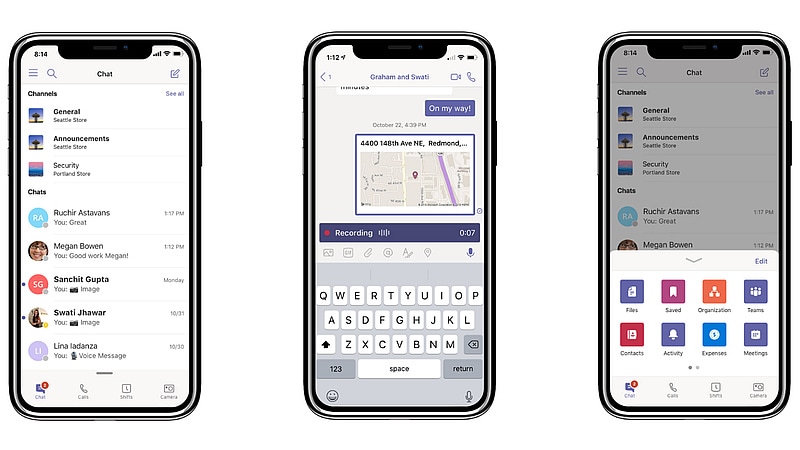 In its bid to outclass Slack as the better team collaboration service, Microsoft has added a host of new features to Microsoft Teams aimed at ‘firstline workers’. The new features introduced by Microsoft include location sharing, smart camera, and the ability to record and share audio messages. Microsoft also plans to add a new ‘Praise’ feature in the upcoming months and is also working on new APIs that will allow organisations to integrate workforce management systems with Microsoft Teams for seamless control over tasks like shift scheduling and attendance to name a few.

The new Microsoft Teams features are targeted at ‘firstline workers’, which are defined by Microsoft as employees who act as customer contact points and represent their company in sectors such as retail, healthcare, etc. The first major change making its way to Teams is the mobile-first approach, “customisable mobile Teams experience” in the company’s own words, which allows ‘firstline workers’ to access different features and work collaboratively using their smartphone. To go with it, Microsoft Teams has received new mobile-only features which include location sharing, smart camera, as well as the ability to record and share audio files, all of which are now available to Microsoft Teams users.

Additionally, IT administrators now have the power to grant Microsoft Teams users access to specific tools that are relevant to their work. Moreover, users can also pin the most frequently-used or important work modules from their module tray to the navigation bar. A new tool called Praise, which is set to arrive at some point in 2019’s first quarter, will let users appreciate their colleague or employee’s work by sending badges. Praise badges will include compliments like ‘Achiever’, ‘Creative’, ‘Team player’, and ‘Problem solver’ among others that will be visible to all members in a group.

Microsoft is also at work creating new APIs that will allow integration of a company’s workforce management system with Microsoft Teams. The new APIs are aimed at creating a seamless management platform where employees and managers can easily access tasks such as attendance, timing, shift scheduling, and payment information among others. One example is the ‘Graph API for Shifts’ for shift scheduling that will be rolled out via public preview later in the ongoing quarter.