​Milan assistant coach Luigi Riccio, speaking in place of the touchline banned Gennaro Gattuso, was pleased with his side’s second half showing as they moved into the top four of Serie A after the Rossoneri’s 2-0 win over Genoa on Monday.

In a frantic match full of chances for both sides, the hosts were by far the better team in the first 45 minutes, with Gianluigi Donnarumma forced into a number of saves to keep the score level. The opportunities continued to come in the second half before Fabio Borini slotted away in the 72nd minute from Andrea Conti’s cut back to break the deadlock.

The points were sealed seven minutes from time as Suso’s fine low finish across goal, following a swift counter attack, meant ​Milan overtook Lazio and Roma to move into fourth place in ​Serie A.

5 – AC Milan are unbeaten in the five Serie A 18/19 games played without Gonzalo #Higuain: 3 wins and 2 draws (10 goals scored, 2 on average per match). Answer. #GenoaMilan

Speaking to Sky Sports Italia after the game, Riccio was pleased with the way his side performed after the break in Monday’s afternoon kick off.

“In the first half Genoa were great in attacking us with many men, but we were much more organised in the second 45 minutes,” he said, as quoted by ​Forza Italian Football.

“Initially we struggled to overcome the last two games, against Sampdoria and Juventus, as a lot of key players weren’t rested.” 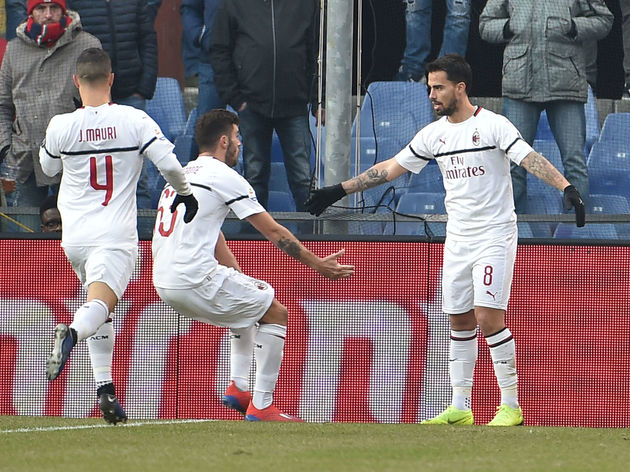 Riccio was also keen to praise new signing Lucas Paqueta, making his first Serie A start, as well as Patrick Cutrone, who it appears will become second choice to the ​incoming Krzysztof Piatek.

“I want to underline Cutrone’s last two games, and even his performance today, enabling us to go forward, opening up spaces,” Riccio added.

“Paqueta is a technical player who can improve a lot and can be decisive in the last 16 metres. He’s also physical, can be good in the air and is very useful in defending.”