Sadio Mane and Mohamed Salah have become the first Liverpool pair to each register at least 20 goals in consecutive seasons since Ian Rush and Kenny Dalglish managed the feat in 1983.

Mane’s goal in Sunday’s 2-1 victory over Fulham was his 20th of the season, moving him level with Salah at the top of the Reds’ goalscoring chart.

He also tied his tally for the previous campaign​, whilst Salah’s total of 44 goals last season ensures the pair have etched their names into Anfield history.

​Liverpool broke the news on their ​official website, adding that the achievement has only been matched by three duos before ​Mane and ​Salah.

Rush and Dalglish’s accomplishment was proceeded by Roger Hunt and Ian St John in the 1960s, but the first pair to both score 20 goals in consecutive campaigns came in the form of Harry Chambers and Dick Forshaw, who dominated for the Reds between 1921 and 1923.

The next task for Salah and Mane will be to replicate this feat in a third consecutive season, following in the footsteps of Hunt and St John, who did so for three campaigns in a row under Bill Shankly between 1961 and 1964. 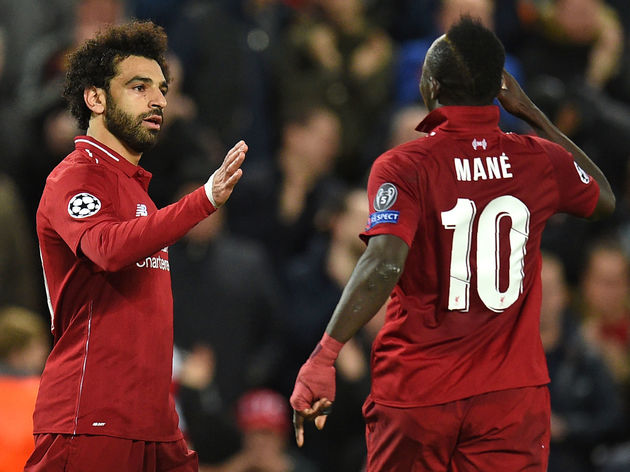 Both Salah and Mane have been in excellent goalscoring form this season. However, the former has struggled in front of goal in recent weeks, allowing Mane plenty of opportunities to catch up in the goalscoring records.

The Senegalese winger has racked up 11 goals in his last 11 games, helping Liverpool keep up with Pep Guardiola’s ​Manchester City at the top of the ​Premier League table. He has also been vital to the Reds’ deep run in the ​Champions League, netting two crucial goals against ​Bayern Munich at the Allianz Arena in the second leg of their round-of-16 tie.

His goals come at a time in which Salah has looked out of sorts in front of goal. The Egyptian has failed to score in his last seven games, which is by far his longest drought since moving to Anfield. Nevertheless, Liverpool remain top of the Premier League, two points ahead of the Citizens, who have a game in hand on their rivals. With upcoming matches against the likes of ​Tottenham, ​Chelsea and ​Wolves, Liverpool fans will be desperate for the duo to continue scoring goals and bring the Reds their first league title in 29 years.

Krushna Abhishek not allowed to share stage with uncle Govinda on...