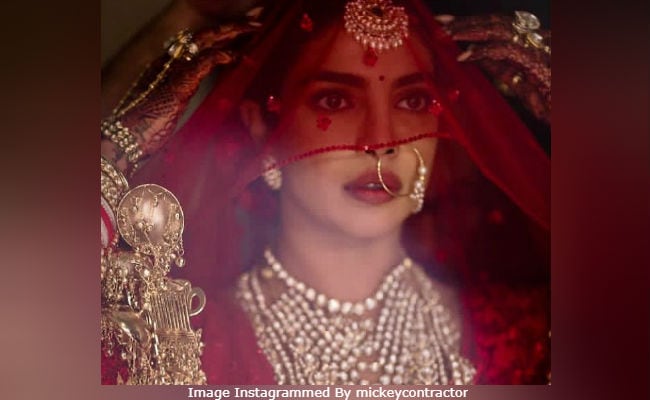 On Monday, some more breathtaking pictures from Priyanka Chopra and Nick Jonas’ Jodhpur wedding hit the Internet. The pictures have been shared by celebrity stylist Mickey Contractor, their official wedding photographer Joseph Radhik and designer Sabyasachi Mukherjee on their respective Instagram accounts. The photos are from the couple’s Hindu wedding ceremony, which was held on December 2, a day after they married in a Christian ceremony. For the wedding, Priyanka wore a red Sabyasachi lehenga and Nick a golden sherwani. The stunning jewellery (including a maang-teeka and a nath), bridal kaleerein and choora complemented her look. Mickey Contractor has shared a solo picture of Priyanka, in which we can see a close-up of her bridal look. “A vision in red,” he wrote. Priyanka Chopra and Nick Jonas married at the Umaid Bhawan Palace in Jodhpur.

Take a look at this dreamy picture of Priyanka and Nick from the wedding venue.

Here’s how the bride walked down for the varmala.

ICYMI, here are some of the other pictures from Priyanka Chopra and Nick Jonas’ wedding.

Priyanka and Nick hosted three wedding receptions in India. They invited Prime Minister Narendra Modi and other dignitaries to their Delhi reception, held just two days after the wedding.

The first reception in Mumbai was only for family and close friends while in the second one several Bollywood celebrities were invited.

The couple flew to London for Christmas and they celebrated New Year in Switzerland.

On the work front, Priyanka Chopra has The Sky Is Pink in the line-up. Hollywood film Isn’t It Romantic? is her next release.