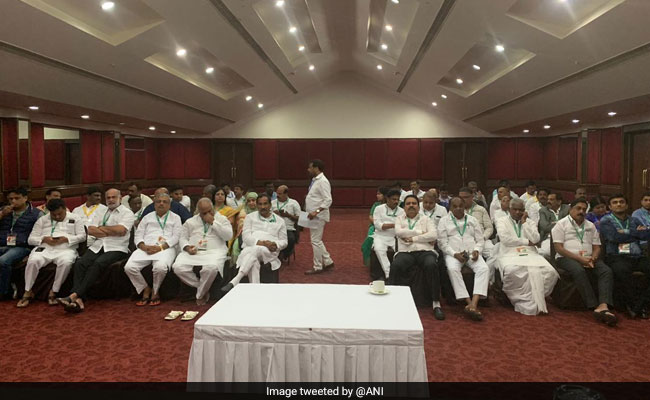 A day after the Congress moved 76 of its 80 Karnataka lawmakers to a resort in Bengaluru amid fears of poaching by the opposition BJP to topple the coalition government in the state, the party has served a show cause notice to two of the four MLAs who did not turn up for the Congress Legislature Party or CLP meet on Friday.

The notice has been sent to rebel Congress lawmakers Ramesh Jarkiholi and Mahesh Kumatahalli, asking why action should not be taken against them.

“For the past many days there have been news reports that you have met BJP leaders in Bengaluru, Delhi and Mumbai, which you have so far not refuted. Additionally, you have met senior BJP leaders on multiple occasions. And it has been reported in the media that you have said that you will resign from the Congress. This, too, you have so far not refuted. Looking at this it appears that you are resigning from the membership of the Indian National Congress,” the notice stated.

The two other lawmakers – B Nagendra and Umesh Jadhav – had written a letter to former Chief Minister and leader of the Congress legislature party Siddaramaiah citing reasons for not turning up for the mandatory Friday meet.

The 76 Congress lawmakers who were moved to Bengaluru’s Eagleton resort directly from the Vidhana Soudha on Friday evening, are likely to remain there until all the BJP lawmakers return from the Gurugram resort they were staying in. “They were taken to the resort to keep them safe from the BJP,” Siddaramaiah told NDTV back then.

Meanwhile, the BJP lawmakers have already started returning to Karnataka. While some — including state party chief BS Yeddyurappa — are already in the city, the rest should be back soon. Mr Yeddyurappa had said that Congress members skipping the CLP meeting and “deep differences” between the coalition partners were indications that the government could “erupt like a volcano” in the coming days.

Both Congress and its coalition partner Janata Dal (Secular)’s leaders have been accusing Mr Yeddyurappa of offering inducements to Congress lawmakers in a renewed plan to take power in Karnataka before the national election, due by May. They allege that Prime Minister Narendra Modi and BJP president Amit Shah have masterminded the plan.

The JDS-Congress has a strength of 118 in the Karnataka Assembly, where 113 is the majority mark. The four MLAs have not resigned from the party, and the ruling coalition says it is confident about its survival.

Josep Bartomeu Admits Barcelona Will Be 'Moving Players on' in Summer...

Dhaakad poster: Kangana Ranaut is scarred and intense as she picks...