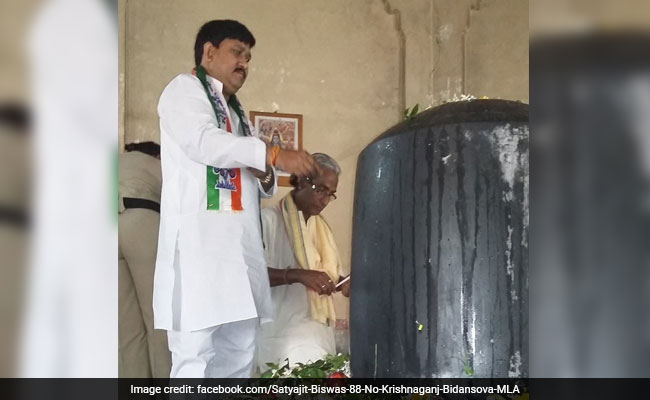 Satyajit Biswas was shot dead at point-blank range while attending a public function in West Bengal’s Majhdia, 120 km from Kolkata. The Trinamool lawmaker from Nadia district was shot dead moments after he inaugurated a Saraswati Puja function, the police said. The event was organised by a club called “Amra Shobai” (All of Us). He was immediately taken to a local hospital where doctors announced him “brought dead”.

Kartik Mondal and Sujit Mondal – both residents of the Majhdia area – were detained yesterday, but now they two have been formally arrested. The Officer-In-Charge (OC) of Hanskhali Police Station has also been suspended.

“So far, we have arrested two persons in this case and detained another three. A country-made revolver used to shoot the MLA has also been recovered. As per our primary findings, it seems that the victim was fired from behind and the act was the result of a well-planned plot,” a police officer was quoted as saying by news agency PTI.

Eyewitnesses said Mr Biswas was sitting on a chair in the front row with a small group of people who had gathered to watch a cultural show on a small stage. Mr Biswas was killed by 2-4 assailants, news agency ANI said.

“It sounded like a firecracker going off. Then I saw Mr Biswas slumped to the ground,” an eyewitness said. “I was just about five feet away from (Satyajit) Biswas and rushed to help him. He was completely covered in blood.”

#Trinamool MLA Satyajit Biswas, 37, #shot dead moments after he lit a lamp at a Saraswati Puja event hosted by a club called ‘Amra Shobai’ which means ‘all of us’ at Majhdia in #Nadia district, 125 Km from Kolkata. #Bloody#Battle for #Bengal#Foretold ? pic.twitter.com/szKtF4B9i3

The Trinamool strongly condemned the killing.

According to police sources, Mr Biswas was shot multiple times from close range. The gunmen took advantage of the confusion and panic following the incident to escape, they added.

The shocking murder comes just days before election dates are to be announced and in the middle of a confrontation between the ruling Trinamool and the BJP.

The BJP has blamed Trinamool’s own factional feud for the killing and demanded a probe by the Central Bureau of Investigation (CBI).

“I think it would be best to have a CBI probe because the CID will not be able to unearth the truth as Satyajit Biswas is the victim of intractable clash; it is best to get the CBI. The truth will come out,” said BJP leader Sayantan Bose.

BJP state president said Dilip Ghosh all the party will fully back and cooperate with a CBI probe into the incident.