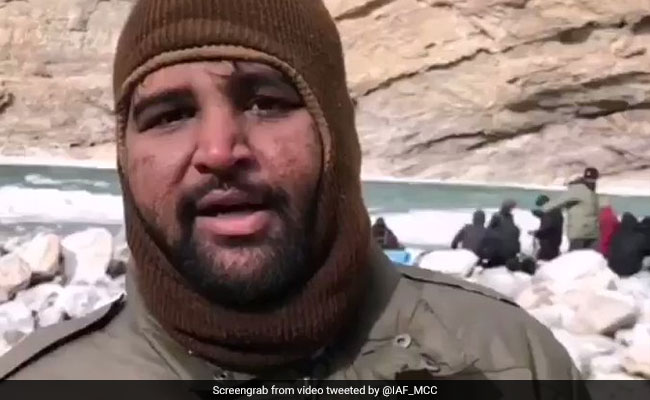 An engineer from Mumbai had a miraculous escape in Jammu and Kashmir’s Ladakh. The engineer was returning from a trek along with a group of people in the region when a sheet of ice under his feet gave way, resulting in him falling into the chilly depths of the river below. An Indian Air Force trekking team, which happened to be close by, promptly rescued the engineer in time. The air force, talking about the incident on social media, said there was “no help available close by” for his rescue.

The air force also posted a video of the engineer, identified as Sagar, who narrated the incident and subsequently thanked the air force for saving him.

“There was a patch we had to cross and it wasn’t clear if it was completely frozen or not. Four to five people before me had already crossed the patch. But as soon as I stepped on it, my foot went through. Immediately, I fell into the ice,” the engineer can be heard saying in the video.

“The commanding officers of the air force came and threw me a rope and rescued me from the ice,” he added.

However, IAF team from AFS Thoise, were on their way back after completing Chadar trek. This team of 07 members lead by Wg Cdr Vikrant Uniyal immediately used their ropes & safety equipment to rescue this individual & saved him in time.
Sagar narrated his story & thanked IAF. pic.twitter.com/eTiFAj7gZv

A trekking team of seven air force personnel from a nearby air force base used ropes and safety equipment for the rescue.

Sagar was a part of what is known as the Chadar trek, which is usually conducted during the winter season. It involves crossing the Leh region’s Zanskar River, which is a tributary of the Indus River. Zanskar River is frozen during winter.