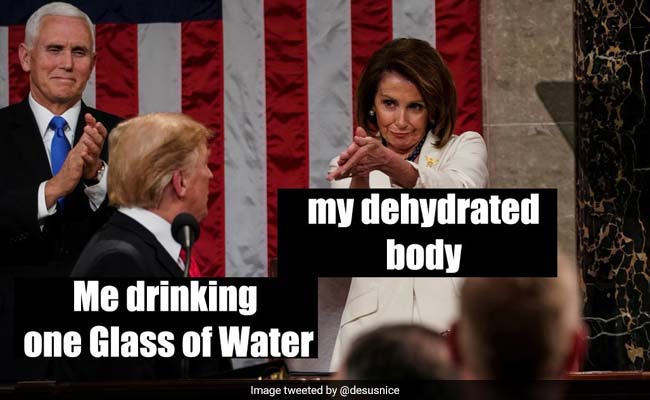 House Speaker and top Democrat Nancy Pelosi stood up to applaud US President Donald Trump during his second State of the Union address on Tuesday night as he called for an end to “revenge politics”. The POTUS turned back to look at Ms Pelosi as she clapped with her arms outstretched. The image of Ms Pelosi, looking directly at Donald Trump with her eyebrows raised as she clapped, quickly became an Internet sensation. Twitter users were quick to turn it into a viral meme.

Watch a video of the moment below:

Imagine the amount of memes we’re gonna get with Nancy Pelosi clapping like this pic.twitter.com/Yr65w0ZXM7

Take a look at some of the best Nancy Pelosi memes:

When I tell my wife I changed a diaper. pic.twitter.com/N2ncXAuUb2

A photo that speaks a million words, by the artist @dougmillsnytpic.twitter.com/DlW5WWxMRC

When I tell my wife I cleaned the bathroom. pic.twitter.com/Ihfnnl3fmJ

Nancy Pelosi and Lucille Bluth have the same energy. #SOTUpic.twitter.com/4nv35HOsx2

The Hill reports that Ms Pelosi’s applause was all the more noteworthy as she remained stoic for most of Donald Trump’s speech.

During his 82-minute speech, Mr Trump spoke to a joint session of the US Congress over his demands that Democrats end their opposition to funding a US-Mexico border wall. He outlined his political priorities and called illegal immigration “an urgent national crisis”. However, it was his crooked tie that managed to gain centre stage during the State of the Union address, inspiring hundreds of jokes online.