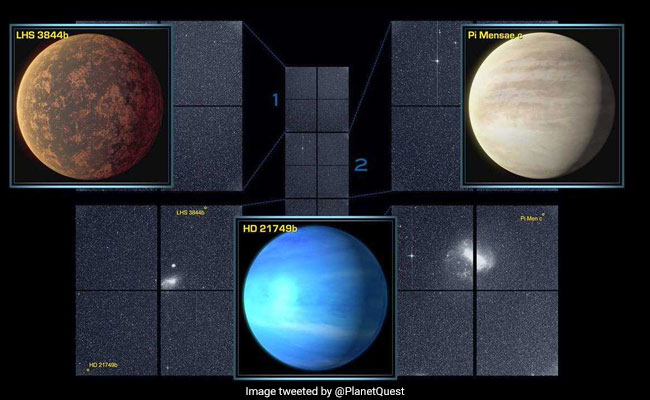 The new planet named HD 21749b, orbits a bright, nearby dwarf star about 53 light years away in the constellation Reticulum. It appears to have the longest orbital period of the three planets so far identified by TESS.

The surface of the new planet is likely around 300 degrees Fahrenheit and is relatively cool, given its proximity to its star, which is almost as bright as the sun, said the team from the Massachusetts Institute of Technology in Boston.

“It’s the coolest small planet that we know of around a star this bright,” said lead researcher Diana Dragomir, a post-doctoral student at the MIT.

The planet is about three times the size of Earth, which puts it in the category of a “sub-Neptune”. Surprisingly, it is also a whopping 23 times as massive as Earth.

But it is unlikely that the planet is rocky and therefore habitable; it’s more likely made of gas, of a kind that is much more dense than the atmospheres of either Neptune or Uranus.

“We think this planet wouldn’t be as gaseous as Neptune or Uranus, which are mostly hydrogen and really puffy,” Dragomir said. “The planet likely has a density of water, or a thick atmosphere.”

The researchers have also detected evidence of a second planet, though not yet confirmed, in the same planetary system, with a shorter, 7.8-day orbit. If it is confirmed as a planet, it could be the first Earth-sized planet discovered by TESS.

The scientists announced the results at the annual American Astronomical Society meeting in Seattle.

Launched in April 2018 for a two-year mission, TESS will survey nearly the entire sky by monitoring and piecing together overlapping slices of the night sky.