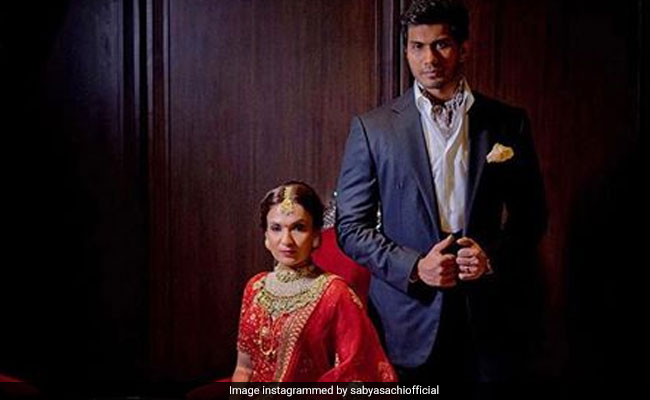 First, congratulations Soundarya Rajinikanth and Vishagan Vanangamudi on the wedding! Rajinikanth’s younger daughter stunned us as the perfect South Indian bride as pictures from her wedding flooded the Internet on Monday morning. For the wedding reception in the evening, she had changed to a scarlet lehenga, and now we know, it was a customised piece from the studios of celebrated designer Sabyasachi. A day after the wedding reception at Chennai’s Leela Palace, the designer released photos of the new bride, revealing details of her outfit. Soundarya styled her intricately designed lehenga with heavy, traditional, heritage jewellery, also from the collections of Sabyasachi.

“Real bride Soundarya Rajinikanth in Sabyasachi clothing and jewellery from the Sabyasachi Heritage Jewelry collection for her wedding reception in Chennai, India,” Sabyasachi wrote in his posts. The bridal look was completed with a maang tika and kaan pasha from the jewellery section. Soundarya’s make-up artist Prakruthi Ananth also revealed in her Instagram posts that Soundarya opted for a pink lip shade instead of traditional red and wore her hair in a messy bun.

A detailed glimpse of Soundarya Rajinikanth’s make-up for the cocktail party:

For the wedding, as is tradition, Soundarya Rajinikanth opted for the draped look and picked a heavily embellished kanjeevaram saree designed by Abu Jani-Sandeep Khosla. She accentuated her new bride look with a matha patti and a flower-adorned bun.

The wedding on Monday morning was preceded by a pre-wedding reception, a combined mehendi function and a sangeet ceremony over the weekend. Here’s an album of Soundarya’s looks for the wedding festivities, as has been shared by her make-up artiste.