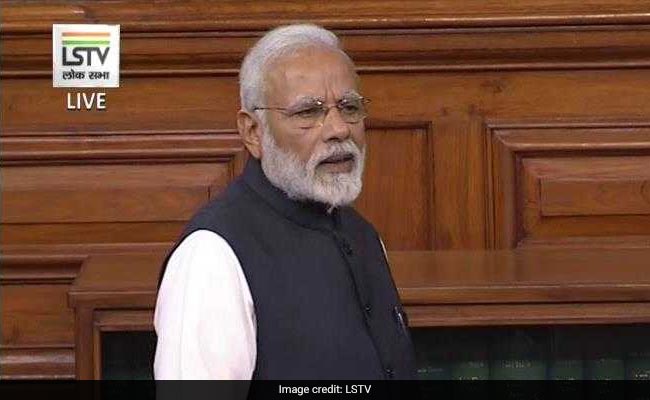 Prime Minister Narendra Modi today charged into the Opposition, saying their idea of Mahagathbandhan (Grand Alliance) is a Maha Milavat (Grand Adulteration) and the people are aware of it. Speaking from the floor of the Lok Sabha in his Motion of Thanks for the President’s Speech, PM Modi said, “In 2014, for the first time in 30 years, the people gave India its first full majority government. Now the Maha-Milawat (Grand Adulteration) is about to come”.

As the opposition broke into loud protests, he said, “The public knows what happens when there is a milawat ki sarkar (a adulterated government)”. Then, indicating the treasury benches, he said, “Don’t worry, the Grand Adulteration people won’t come here.”

In what could be his last speech from the floor of the house before the national elections  are declared, PM Modi shred the Congress, claiming Indira Gandhi dismissed elected governments “over 50 times”; defence deals with “Chachas and Mamas”; and “benami properties” abroad – an indirect reference to the Congress chief Rahul Gandhi’s brother-in-law, businessman Robert Vadra, who is being questioned by the authorities in a money laundering case.