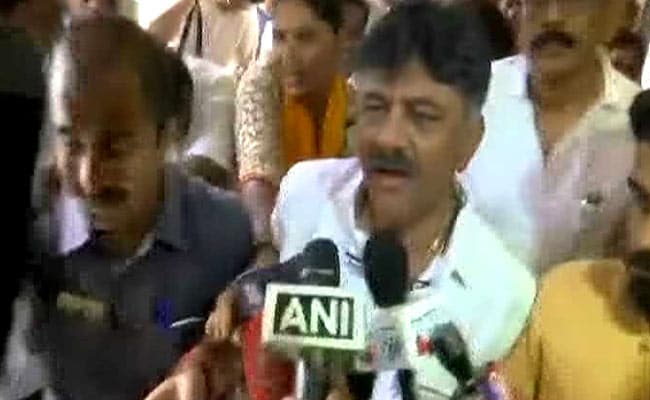 The Congress-Janata Dal coalition government in Karnataka appears to be teetering on the edge with nearly a dozen lawmakers giving their resignation on Saturday, while Chief Minister HD Kumaraswamy is still in the US on holiday. Eight Congress and three Janata Dal Secular legislators are at the office of the state assembly speaker, reportedly to submit their resignation. If these legislators do quit, the coalition may lose its majority.

The Congress and JDS together have 116 in the 224-member state assembly where 113 is the majority mark. The coalition will crash if 15 lawmakers quit.

“I have come to submit my resignation to speaker. I don’t know about my daughter (Congress MLA Sowmya Reddy), she is an independent woman,” Congress legislator Ramalinga Reddy told news agency ANI. “I am not going to blame anyone in the party or the high command. I somewhere feel I was being neglected over some issues. That is why I have taken this decision,” he added.

Karnataka minister DK Shivakumar, the Congress trouble shooter who has spent many months trying to keep the flock together, appeared to have coaxed three Congress lawmakers to go with him, after meeting the rebels at the Speaker’s office. “Nobody will resign. I had come to meet the MLAs,” he said to the media, downplaying the danger signals.

Karnataka assembly Speaker Ramesh Kumar said he will look at the resignations on Monday, news agency ANI reported. “I was supposed to pick up my daughter that is why I went home. I have told my office to take resignations and give acknowledgement that 11 members have resigned. Tomorrow is leave, so I will see them on Monday,” Mr Kumar said, ANI reported.

Mr Kumaraswamy as well as the Congress have accused the BJP of relentlessly pursuing their lawmakers and attempting to bring the government down.

The BJP, which has 105 legislators, says the party has nothing to do with the walkout by the Congress legislators – and says if the government falls, the BJP should be invited to form government.

“Congress-JDS coalition has been rejected by people of Karnataka. Despite their coalition in Lok Sabha polls, BJP won a massive mandate. It clearly shows the mood of people. MLAs certainly seem to be facing brunt of public anger against coalition,” said the BJP’s GVL Narasimha Rao.

On Monday, two Congress legislators, Anand Singh and Ramesh Jarkiholi had resigned, bringing the ruling coalition of the JDS and the Congress down to 116. The resignation of the two legislators has not been formally accepted though.

Anand Singh said he was resigning as he was unhappy with a land deal between the state government and JSW Steel in his home district of Ballari. Mr Jarkiholi gave no reason in his resignation letter. But he had distanced himself from the party ever since he was dropped from the cabinet – skipping party meets and holding meetings with other MLAs believed to be unhappy with the Congress.

The Congress has 79 legislators including Mr Singh and Mr Jarkiholi.

Mr Kumaraswamy’s JDS has 37 legislators. It also has the support of a BSP legislator and an Independent. Even without two lawmakers who quit, the coalition still has a majority with 116 legislators.

The Congress-JDS coalition suffered a disastrous outing in the Lok Sabha election; the two parties managed just one seat in the 28 seat- state. The rest were scooped up by the BJP, led by former Chief Minister BS Yeddyurappa. The two parties had joined forces after the assembly elections last year in May to keep the BJP out of power.