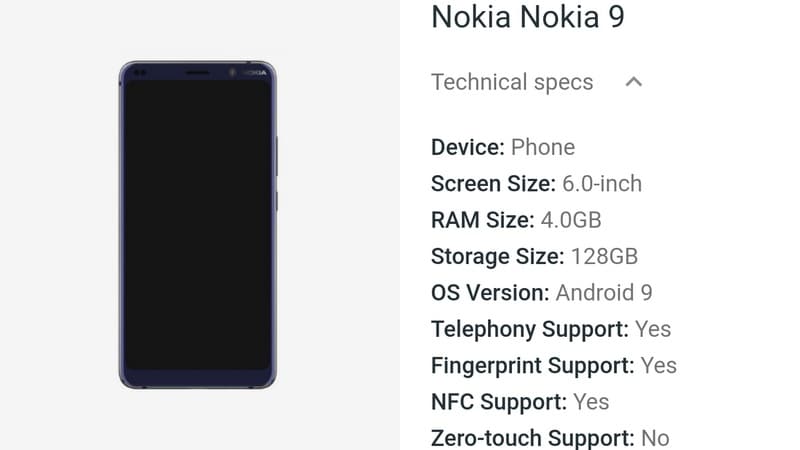 Nokia 9 PureView flagship is expected to be launched by HMD Global later this month, but ahead of the announcement, Google has shed some light on the upcoming highly anticipated smartphone. The official Android enterprise catalogue maintained by Google has listed the Nokia 9 PureView, giving us a glimpse of the smartphone’s front panel as well as some of its key specifications. The listing on Google’s Android smartphone catalogue for its enterprise partners shows a familiar design that we have already come across in leaked renders, lending a dash of credibility to it.

The Nokia 9 PureView’s listing on Google’s Android enterprise catalogue shows a render of the Nokia 9 PureView’s front panel without a notch and it closely resembles the alleged press renders and leaked live images of the upcoming smartphone that have surfaced in the past few weeks. In addition to the render, the listing also reveals some key specifications of the Nokia 9 PureView such as a 6-inch display, 4GB of RAM and 128GB of internal storage. NFC support and the presence of a fingerprint sensor are also mentioned. As per previous leaks, we believe that the last will be an in-display fingerprint sensing module.

On the software side, the Nokia 9 PureView is listed as running Android 9 Pie, something that is not all too surprising. Google’s enterprise device database does not mention any details about the battery capacity, the chipset powering the device or the rumoured penta-lens rear camera setup of the smartphone. The listing was first spotted by MySmartPrice.

Interestingly, the Nokia 9 PureView’s listing on Google’s Android enterprise website appears to be no longer accessible on a PC. However, it can still be viewed by visiting the website on a mobile device. As for the smartphone itself, it is expected to come with support for 18W fast charging and Light’s computational photography technology for improved low-light photography output. We’ll know more once the company officially lifts the cover from the Nokia 9 PureView at an event scheduled for February 24, 2019 in Barcelona.