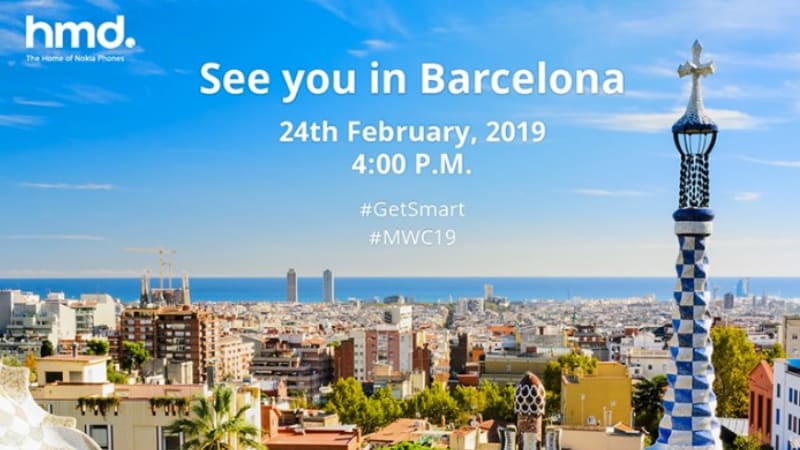 Mobile World Congress (MWC) 2019 is shaping out to be a grand affair. Major OEMs like Huawei, Oppo, LG, and more are set to host events in Barcelona, and now HMD Global has also sent out invites. The company is set to host an event on February 24 at 4.00pm local time (8:30pm IST), and it is largely expected to launch the highly anticipated Nokia 9 PureView smartphone. There may be other smartphone announcements alongside too, with the Nokia 1 Plus and Nokia 8.1 Plus also rumoured for an MWC 2019 launch. However, the Nokia 9 PureView will be the first true flagship device from HMD Global, and it is tipped to sport a penta-lens camera setup.

The invite reads ‘See you in Barcelona’, and has the event details with a photo of the picturesque city as backdrop. HMD Global Chief Product Officer Juho Sarvikas recently confirmed the company’s presence at MWC via a tweet, and the invite cements it further. Leaked teasers in the past suggest the Nokia 8.1 Plus smartphone may also be launched alongside the Nokia 9 PureView phone. The Nokia 1 Plus was recently also leaked, and it could also be made official in Barcelona.

The Nokia 9 PureView has seen a flurry of leaks all of last year, with delay in production blamed on its complicated penta-lens setup at the back. HMD Global seems to have crossed past those hurdles to hopefully launch the smartphone at MWC. Other leaked specifications of the Nokia 9 PureView include a 5.99-inch QHD PureDisplay panel with HDR10 support, an in-display fingerprint sensor, Qualcomm Snapdragon 845 SoC, 6GB RAM and 128GB inbuilt storage. However, HMD Global may manage to use the Snapdragon 855 SoC, the current flagship mobile SoC from Qualcomm. On the software front, the phone will be based on the Android One platform and most likely run on Android 9 Pie operating system.

The Nokia 1 Plus, expected to launch in India first, is also tipped to be announced at MWC as well. The alleged Android Go phone is expected to be a successor to the Nokia 1, which HMD Global had launched as its most affordable smartphone in India last year. The Nokia 1 Plus is rumoured to have entry-level hardware, including 1GB of RAM, quad-core MediaTek MT6739WW SoC, and a qHD+ (480×960 pixels) display. It is could run Android 9 Pie (Go edition) out-of-the-box.

Why This New Smartphone Is the Most Stylish Choice for Millennials