​Wolves manager Nuno Espirito Santo has backed his squad to build on their positive start to the season, after his side defeated Premier League leaders Liverpool 2-1 at Molineux to progress to the fourth round of the FA Cup.

The Portuguese named a strong lineup for the FA Cup tie against the Reds, despite making five changes to his team. The decision paid off for Espirito Santo however, with goals from Raul Jimenez and Ruben Neves securing Wolves’ passage to the next round.

The ​Wolves boss was understandably pleased after the game, highlighting his team’s organisation has a key component in the victory. 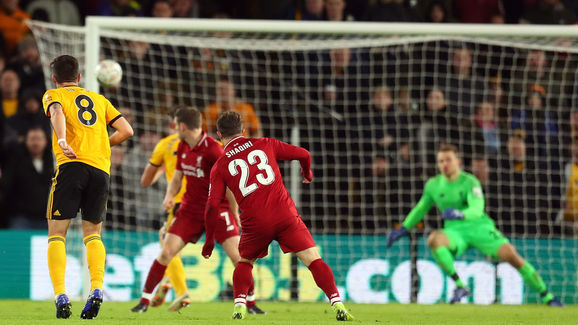 “I think we played well. I think we were very organised, very compact,” Nuno said, as quoted by ​Wolves’ official website.

“We were hard to break and really go out. After we recovered the ball we had possession, we tried to stretch the pitch, so it was a very good performance from the boys today.

“It’s a different approach. We go game by game. Next game is in the Premier League. It means a lot because it’s a challenge, it’s a trophy, and when the next game comes we’ll approach it in the same way.”

Espirito Santo went on to praise the qualities of midfield superstar Ruben Neves, before lauding his team’s immediate response to ​Liverpool‘s equalising goal. “Two different goals, two different situations, but two good strikes of the ball. It’s something we’ve seen before and we look to see it again. It’s the beautiful part of the game which everyone enjoys, of course we are happy and it’s important for the individuals.

“Ruben has the talent. He showed it before and it’s something we encourage him to do. It was a good strike and we are happy for him, and especially our fans.

“Important was the way we reacted immediately, the first moment that the ball goes up, we reacted and went again, because we know we were punished.

“The way we conceded is something that we have to analyse because we have so many people there to avoid such situations, but I’m very happy, the fans were fantastic, behind the team.”

Jurgen Klopp Confirms Naby Keita Is 'Ahead of Schedule' & Provides...