The new GeForce RTX 2060 GPU is strategically important for Nvidia, as it brings RTX capabilities to a wider audience thanks to its lower price tag. On stage at the launch event just before CES 2019 kicks off in Las Vegas, Nvidia CEO Jen-Hsun Huang said that the company has tuned the specifications of the GeForce RTX 2060 keeping in mind the negative early reactions to the previously launched GeForce RTX 2070, GeForce RTX 2080, and GeForce RTX 2080 Ti.

Nvidia promises performance equivalent to that of the GeForce GTX 1070 Ti which would represent tremendous value for gamers. According to the company, one-third of its user base is now made up of GeForce xx60-level and higher-tier GPUs. The GeForce RTX 2060 will target those looking for an upgrade from the GeForce GTX 960, GeForce GTX 970, and GeForce GTX 1060.

As for specifications, only one configuration of the GeForce RTX 2060 Founders Edition was announced, contrary to rumours that there could be multiple variants with different amounts and types of RAM. The announcement today indicated that 6GB of GDDR6 on a 192-bit bus is standard, though other variants might come to light in the future.

The GeForce RTX 2060 uses the same Turing architecture as its beefier siblings, but with 1,920 CUDA cores, 240 Tensor cores, and an unconfirmed number of RTX cores (likely to be 30). With a base clock of 1365MHz and boost clock of 1680MHz, the GeForce RTX 2060 can achieve up to 5 Gigarays per second of ray tracing bandwidth and 52 Teraflops of overall processing power.

The frame rate in RTX-enabled games such as Battlefield V will drop significantly when RTX effects are enabled. In the case of the GeForce RTX 2060, the framerate will dip well below 60fps. However, Nvidia is now trying to position its DLSS (Deep Learning Super Sampling) upscaling tech as part of RTX. Huang suggested that running a game at a lower resolution with DLSS will deliver the same experience and allow the frame rate to jump back up to roughly 60fps. 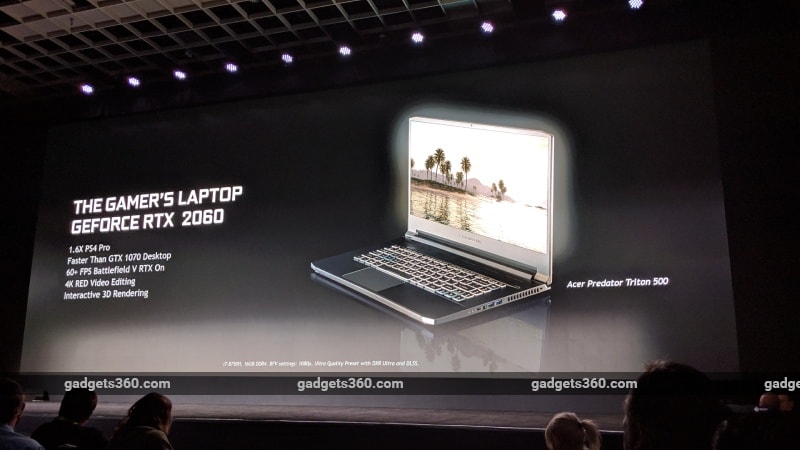 For those who like thin and light gaming laptops, Huang announced the also-previously-rumoured mobile GeForce RTX 2060, GeForce RTX 2070, and GeForce RTX 2080, all of which can be implemented with Nvidia Max-Q optimisations to keep heat and power draw under control. According to Nvidia, over 40 models from every major manufacturer will be released on January 29, of which 17 will implement Max-Q. Mobile GeForce RTX GPUs.

These new GPUs will bring real-time ray tracing effects to laptops for the first time. Huang promised better performance than today’s top-end gaming consoles, in a much smaller, portable package. Huang showed off models from MSI, Gigabyte, and Acer on stage. Multiple companies are expected to show their laptops at CES over the next week.

Huang also announced new G-Sync monitors including a 65-inch TV from HP called the HP Omen X Emperium, a new and improved third-generation G-Sync Ultimate specification, and a certification programme for VESA Adaptive Sync monitors that could deliver some of the benefits of G-Sync without the costly custom hardware.

Stuffcool Bac Earphones With Microphone Launched in India at Rs. 799

Huawei Says US Curbs to Cut Smartphone Unit's Revenue by Over...