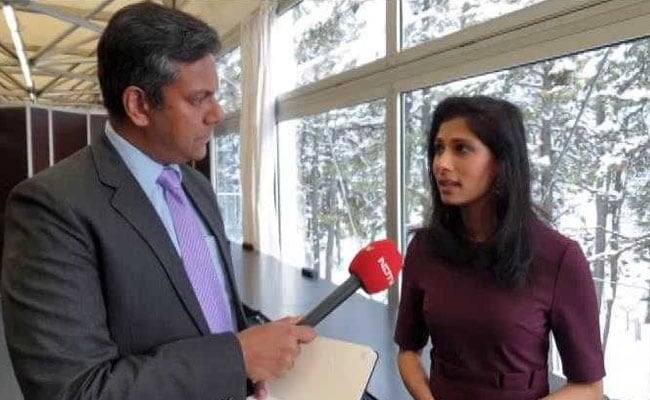 Proper implementation of the Goods and Services Tax is a work in progress, Gita Gopinath, the Chief Economist of the International Monetary Fund said today. In an interview to NDTV, Ms Gopinath said, “The indirect tax revenues which have come in are weaker than were expected, which is partly a reflection of how it was rolled out and the implementation issues with that and that would continue to have to be fixed.”

Agricultural distress in India is another key area that the IMF is looking at.

“We have some serious stress in the agricultural sector and that is another area we will need to do a lot better on. It should not take the form of loan waivers but in the form of cash support but not necessarily in the form of input subsidies,” said Ms Gopinath, the first woman to occupy the post.

Quoting sources, Bloomberg reported today the plan to give cash to farmers instead of subsidies will have an additional cost of roughly Rs 70,000 crore to the exchequer annually after a full roll-out of the programme.

Ms Gopinath, however, did point out that the overall state of India’s economy was positive despite the IMF’s revised World Economic Outlook. Global growth has been revised downward to 3.5 per cent in 2019 from 3.7 per cent last year.

India, however, appears to be fairly well insulated from the global risks.

“India’s growth for 2019 is forecast to be 7.5 %. That puts India in the bracket of one of the fastest growing economies, large economies of the world. The Indian economy is quite healthy. We revised it up slightly and that was because of lower commodity prices and the effect that that would have on monetary policy,” Ms Gopinath told NDTV.