On its first run on the tracks with passengers on board, India’s first engine-less train Vande Bharat Express, or Train 18, ran at a top speed of 130 kmph on Friday, flagging off a new niche for semi-high speed trains in India.

The train’s speed was capped at 130 kmph keeping in view the condition of the tracks, even though it has topped 180 kmph in its trial runs.

Travelling at its current speed, the train ran from New Delhi to Varanasi in only eight hours, as against 12-13 hours that it would take in the Shatabdi Express, which will complete 30 years in service this year.

Train 18 will start commercial operations from February 17, and will run five days a week.

Railway Minister Piyush Goyal said it was decided to maintain this speed on the flag-off day as more work is required on the tracks, such as fencing, before the train can run at a higher speed. In the coming days, the idea is for the train to run at a speed of about 160 kmph.

Other than its high speed, the train boasts a host of features that can rival its counterparts in Europe and Japan. 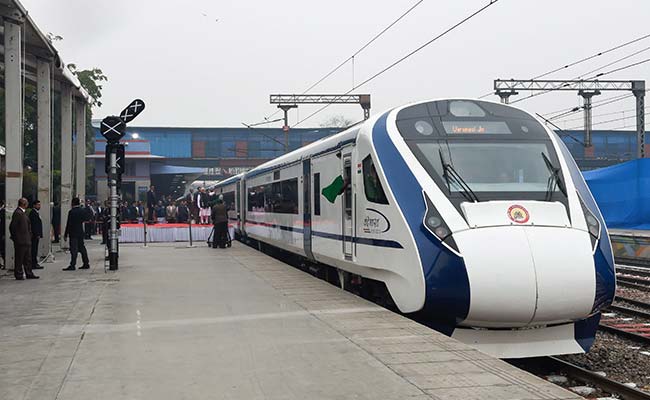 Train 18 will start commercial operations from February 17, and will run five days a week

When asked about the possibility of rationalising the fare once the operations of Train 18 achieves scale, Mr Goyal said, “The railways hasn’t increased fares for years and is probably one of the least cost railways to travel in. In Rs 5 today, you cannot even get a cup of tea, but you can take a ride in Kolkata Metro. So railways has continued to maintain its service for the common people, for the person who may not be able to afford any other form of transport and we will continue to strive to serve our people in the best and economical fashion.”

For safety, the train is equipped with CCTV cameras, automatic doors and a GPS-enabled passenger information display.

“You could call this train a revolution for Indian Railways. It is a very technologically advanced and economical system. For safety, particularly, the braking system enables us to dead-stop the train quicker than ever,” said Manoj Tiwari, who drove the train from Delhi till Prayagraj, formerly Allahabad.

“The speed acceleration and deceleration is very less, which helps us save time. And in the coming few days, it will definitely run at 180 kmph,” said Mr Tiwari.

The government has already started a tendering process to buy 30 more semi-high speed trains, Mr Goyal told reporters on board the Vande Bharat Express. “Encouraged by the positive feedback received on the run of the Vande Bharat today, I have decided to place an order for hundred more such trains. We will have them cover all directions, all routes where shorter distances can be covered in much shorter time and people can enjoy a comfortable journey,” Mr Goyal added.

Explaining the significance of the Delhi-Varanasi route, Mr Goyal said, “It’s a matter of pride that the train is made in Chennai and is serving the national capital and Varanasi. It is a symbol of national unity and oneness that we see in the country.”

“It’s of deep significance that a 100 per cent indigenous train, but of global standards, is covering the distance between New Delhi and the world’s oldest living city,” Mr Goyal said.

The railways has so far trained 10 drivers so run these trains.