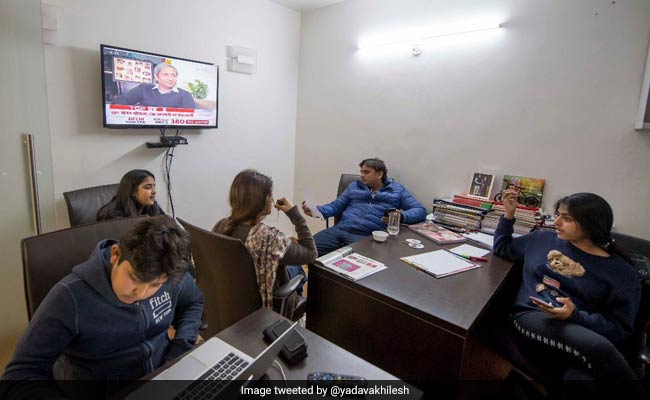 Samajwadi Party chief Akhilesh Yadav, who is reportedly under the scanner of the Central Bureau of Investigation (CBI) that is investigating over 20 cases of illegal mining, has suggested with a poetic tweet that he is not wary of a probe against him.

The former Uttar Pradesh chief minister on Tuesday posted a picture with his wife, Kannauj lawmaker Dimple Yadav, and their children. His caption for the picture was a couplet. “Duniya Janti hai is khabar me hua hai mera jikra kyun, badniyat hai jiski buniyad us khabar see fikr kyun (World knows why I am mentioned in the news, why to worry with news whose foundation is bad intention),” he tweeted.

Sources have told NDTV that the CBI is ready with a list of questions for the Samajwadi Party leader who was handling the mining portfolio when he was the chief minister of Uttar Pradesh. The agency officials claim they have the documents to prove Mr Yadav’s complicity in the mining scam, alleging that out of the 22 mine leases in question, 14 were cleared by Mr Yadav. The rest were cleared by Gayatri Prasad, the agency says.

“Just 18 days after the Allahabad High Court cancelled the leases sanctioned by his government in 2013, some people whose leases were cancelled got contracts again. He needs to answer that,” an officer who has direct knowledge of the matter told NDTV. “All approvals given by the district magistrate were taken by then mining minister,” said the officer who asked not to be named.

Akhilesh Yadav has called the possible probe against him politically motivated. “Now we have to tell the CBI as to how many seats we have distributed in the gathbandhan (BSP-SP alliance). I am happy that at least the BJP has shown its colours. Earlier, the Congress gave us the chance to meet the CBI, and this time it is the BJP, which has given us this opportunity,” he recently said.

BSP chief Mayawati and Akhilesh Yadav were earlier part of the Mahagathbandhan, a proposed alliance of regional parties with the Congress. However, they and the Congress had a fallout, and they recently decided to leave the grand old party out of their electoral plan in Uttar Pradesh. They have, however, decided not to contest in Amethi and Rae Bareli, which are considered to be Congress bastion.

Mayawati recently spoke to Mr Yadav over phone and said that he shouldn’t be “shaken by such gimmicks”. The BSP chief also alleged that like the Congress, the ruling BJP was “misusing” the government machinery to “trap” its opponents in false cases.

The report of a CBI probe against Mr Yadav triggered huge uproar by the opposition in Rajya Sabha on Monday. The Congress, Mayawati and the Samajwadi Party accused the government of “vendetta politics” meant to block the proposed opposition alliance in Uttar Pradesh.