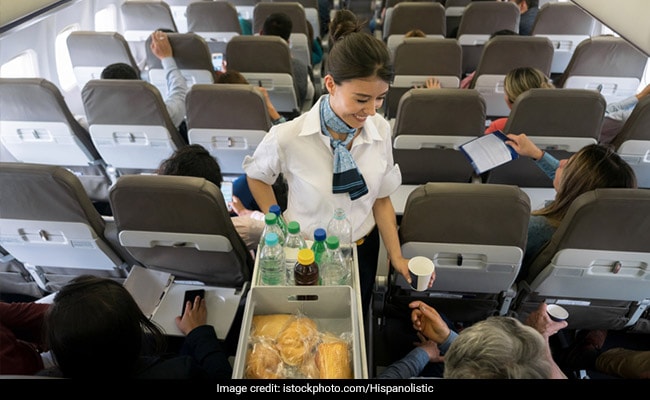 Use your credit card to buy a taco, a beer or a taxi ride, and it’s very likely the receipt screen will solicit a tip. A few years ago, that same option arrived on airlines, to the chagrin of passengers who remember when most food and drink up there was free.

Frontier Airlines, a pioneer in the tip-your-attendant department, used to split their tips on each flight. As of Jan. 1, however, Frontier’s 2,200 flight attendants no longer pool their gratuities. Now it’s every man and woman for themselves, and perhaps one beneficiary will be the harried airline passenger.

“We appreciate the great work of our flight attendants and know that our customers do as well, so [the payment tablet] gives passengers the option to tip,” Frontier spokesman Jonathan Freed said Friday. “It’s entirely at the customer’s discretion, and many do it.” In fact, it’s also at the discretion of the flight attendant: At Frontier, they can choose whether to trigger the tip option.

For decades, U.S. flight attendants emphasized their role as safety professionals-reminding passengers that, at any moment, they must become emergency personnel if someone falls ill, gets bellicose or the flight experiences a problem. Pushing the drink trolley was just a side-job.

That messaging got a tremendous boost by 9-11 and the U.S. airline industry’s subsequent wholesale reorganization. As carriers emerged from the bankruptcy era and began raising pilot and flight attendant salaries, they also began investing in on-board service standards as a way to command higher fares while seeking cuts elsewhere.

The Association of Flight Attendants, which represents Frontier employees, objected to the introduction of tipping in 2016. “Management moved forward with a tipping option for passengers in hopes it would dissuade flight attendants from standing together for a fair contract-and in an effort to shift additional costs to passengers,” AFA President Sara Nelson wrote Friday in an email.

The union has been trying to reach a new contract with Frontier for two years. In November, the flight attendants voted to authorize a strike, although federal mediators have yet to declare the talks at an impasse.

“I think it’s just like in a restaurant and, frankly, not an image the airlines want to have.”

Despite the differing views on tips, Frontier attendants pressed to keep their own gratuities, to allow for “better transparency” and counter past problems with tip distribution, Nelson said.

Frontier’s tablet-based payment system allows flight attendants to skip the tip screen when a customer pays; the airline said it doesn’t track how often flight attendants solicit tips via the tablets. Frontier declined to release specifics about how much in tips it distributes monthly, though Freed, the airline spokesman, said flight attendants had earned “millions of dollars” in tips over the past three years. (The union didn’t dispute that estimate.)

Nevertheless, Denver-based Frontier seems to be in the vanguard. Two other national ultra low-cost carriers, Spirit Airlines Inc. and Allegiant Travel Co., don’t include tipping in their customer-payment systems. Allegiant also has a policy against tipping.

“I think it’s just like in a restaurant and, frankly, not an image the airlines want to have,” said Henry Harteveldt, a frequent flier and founder of Atmosphere Research Group, which analyzes the travel industry. He said the new policy may cause some flight attendants to see their income lag colleagues, and could also affect service levels on board given potential differences between big tippers and others.

“This could really complicate the culture at Frontier,” Harteveldt said.