After the Android Pie update last month, OnePlus 5 and OnePlus 5T users started reporting of Wi-Fi compatibility issues on their phones with certain third-party apps. The company has now rolled out a hotfix update, bringing a fix for that issue, alongside few other repairs as well. The rollout began for a few users last week, but now more users have started reporting of getting the update. All OnePlus 5 and OnePlus 5T users are advised to install this update on their phones.

The OxygenOS 9.0.2 hotfix update has rolled out for OnePlus 5 and OnePlus 5T users. Global Product Operations Manager Manu J confirmed the arrival of the update on OnePlus forums. Users have also started sharing screenshots of receiving the update on the forums. According to these screenshots, the OxygenOS 9.0.2 update is 1748MB in size, and brings along a few fixes.

The changelog suggests that the update brings a fix for the Wi-Fi connectivity issue with certain third-party apps, an issue with the physical/capacitive navigation buttons not working at times on the OnePlus 5 was also fixed, and the missing 4G VoLTE toggle was also brought back. The update fixed random reboots when Screen Casting, improved overall stability for Wi-Fi connection, optimised sRGB display mode, and optimised reading mode as well. 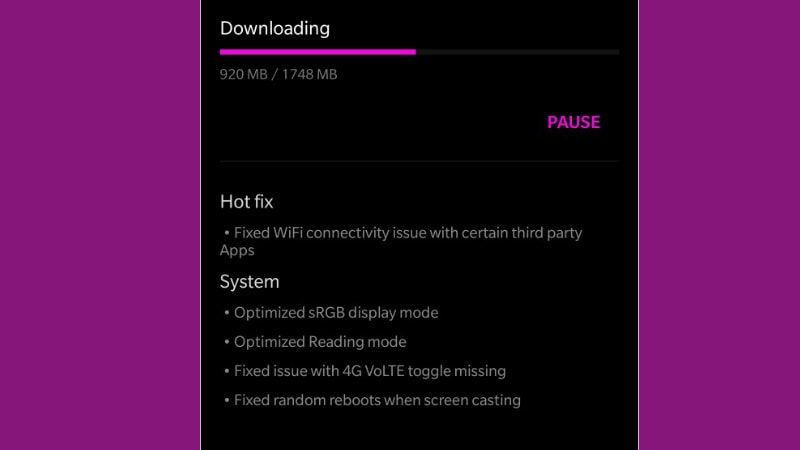 This update comes after the OxygenOS 9.0.1 update rolled out in first week of January, which also brought bug fixes, Wi-Fi stability improvements, optimised display mode, and optimisations to the reading mode as well.

As mentioned, a few users started receiving the update last week itself, but a broader rollout to more users has now begun. The phone owners will automatically receive the OTA update notification but if you want to manually trigger an update search, you can head over to the System Update option in Settings.