Budget flagship aka “flagship-killer” smartphones are popular because they offer powerful flagship processors at fairly accessible prices. OnePlus set the bar years ago, but now several manufacturers are offering their take on the category. With that said, the OnePlus 6T has managed to grab a large chunk of the budget flagship market thanks to its powerful hardware and up-to-date software. Even with lower prices, models such as the Asus ZenFone 5Z and Poco F1 have not managed to knock the OnePlus 6T out. Honor has recently brought in the View 20, which is also well equipped, and is priced at par with the OnePlus 6T. Naturally, picking between these two smartphones won’t be easy, so we put them in a head-to-head comparison to see which one is right for you.

These two smartphones are priced exactly the same but have taken different approaches when it comes to design. Both have glass back panels and metal frames, but the Honor View 20 (Review) stands out due to its flashy colours (Sapphire Blue in this case) and the V-shaped pattern on its rear which looks stunning under light.

At the front, the OnePlus 6T (Review) has a dewdrop notch while the Honor View 20 has a hole-punch display. The View 20 is a little closer to having an all-display front here and looks more futuristic. Both phones have their earpieces moved towards the frames to maximise screen real estate.

The Honor View 20 has a 3.5mm headphone jack, which is missing on the OnePlus 6T forcing users to use a USB Type-C to 3.5mm dongle or Bluetooth headphones. Honor has equipped the View 20 with an IR emitter, which can be used to control appliances. The View 20 also has a physical fingerprint scanner, which the OnePlus 6T misses out in favour of an in-display fingerprint sensor which is a little slower. 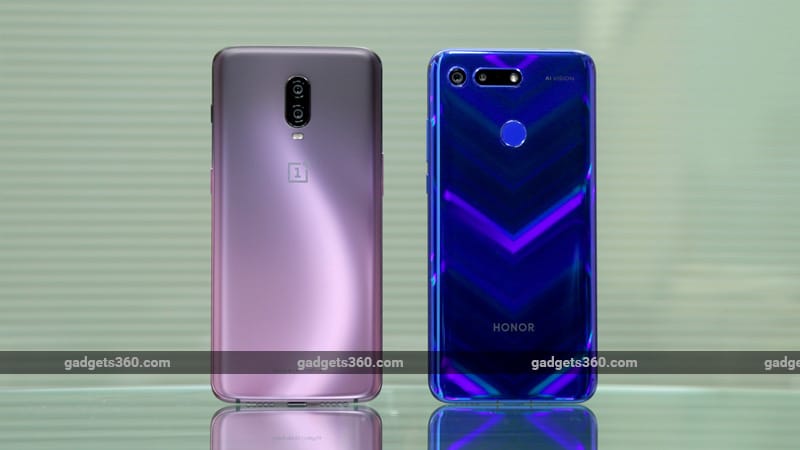 The Honor View 20 (right) has a striking back

Overall, between the Honor View 20 and the OnePlus 6T, the View 20 gets a point for a modern and appealing design.

You are greeted by full-HD+ display panels on both phones, but the OnePlus 6T uses an AMOLED panel while the View 20 has an LCD panel instead. OnePlus offers more colour profiles including sRGB, DCI-P3, and an Adaptive mode, while Honor only lets you choose between a natural and a vivid colour profile. You can adjust the colour temperature of the displays on both phones, which is a good thing.

While using these smartphones outdoors, we found them to have good sunlight legibility. Overall, the OnePlus 6T has a slightly better display panel compared to the View 20.

Connectivity options include Bluetooth 5, dual-band Wi-Fi ac, and support for dual 4G as well as VoLTE on both phones. The OnePlus 6T has a 3700mAh battery while the View 20 has a bigger 4000mAh battery. Both phones support fast charging with their own chargers. OnePlus ships the 6T with a 20W charger in the box, while the View 20 comes with a 40W Supercharger.

These smartphones have premium hardware and their software is also up-to-date. Both smartphones run Android 9.0 Pie, with the OnePlus running OxygenOS and the Honor View 20 running Magic UI on top. While the underlying software is the same, each UI has its own set of customisations.

Honor preinstalls some bloatware and there are quite a few features such as Digital Balance which helps you manage how you spend your time on this device. OxygenOS is closer to stock Android with subtle customisations. We prefer the near-stock Android approach from OnePlus. Also, OnePlus has a better track record with respect to updates and software support compared to Honor, so this round goes to the 6T.

When using smartphones with two of the most powerful processors to launch in 2018, it is hard to pick sides. We have spent time using both, the OnePlus 6T and the Honor View 20, and we didn’t notice any lag or stutter even with heavy apps such as 3D games. With abundant RAM, both can multitask easily without breaking a sweat. However, we did notice that the OnePlus 6T was more aggressive with RAM management and was more likely to kill processes running in the background. 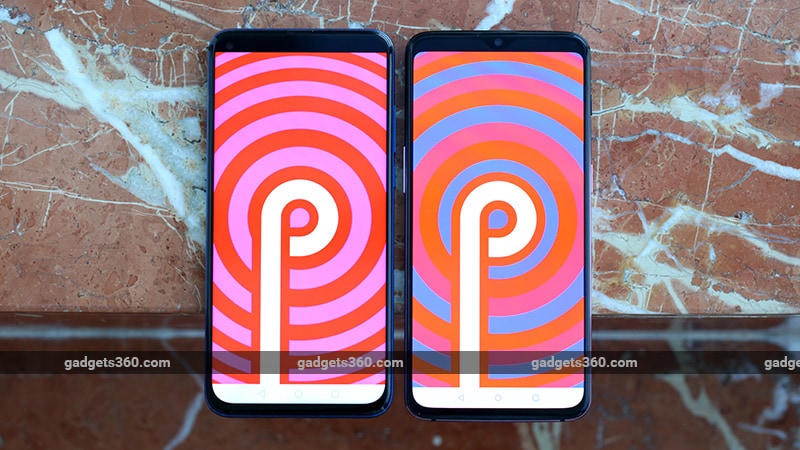 The dewdrop notch and hole-punch displays on these phones both feel large and spacious, but are missing small chunks in the centre and in one corner respectively. We preferred the Honor View 20 here purely because the hole-punch is barely noticeable while watching videos or playing games. 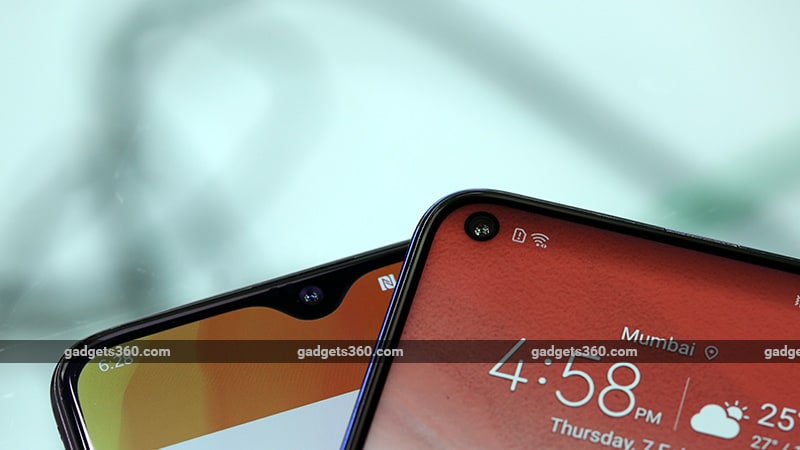 We played PUBG Mobile on both these phones in similar conditions to gauge how they perform. Both are capable of playing the game with the graphics set to HD and the frame rate set to High without any lag or stutter. After a 40 minute game session, we observed that while neither of them got hot to the touch, the OnePlus 6T had slightly higher battery drain. The Honor View 20 managed to keep the battery drain low, possibly because of its higher overall battery capacity, which means that you can play for longer before needing to plug it into the charger.

Pick either phone and you will be able to get through at least one full day on a single charge. We also put these phones through a charging test to find out whether OnePlus 6T would charge slightly faster because of its smaller battery, or the Honor View 20 would win because of its more powerful charger. In 30 minutes, the OnePlus 6T charged to 53 percent while the Honor View 20 got to 49 percent. In an hour, the 6T was at 90 percent while the View 20 was close behind at 87 percent. Full charges took 1 hour 23 minutes for the 6T, and 1 hour 33 minutes for the View 20. All in all, their numbers are pretty similar, though the OnePlus 6T is marginally faster.

In our HD video loop test, the OnePlus 6T had managed 13 hours and 45 minutes when we reviewed it last year while running a test again resulted in the phone managing 16 hours and 22 minutes. This could be because of the multiple software updates that the device received over time. The Honor View 20 managed a little over twelve and a half hours in the same test.

Honor has added AI to its camera app, which helps it recognise what it is pointed towards. You also have multiple camera modes to choose from. The Honor View 20 is capable of taking 48-megapixel shots but is set to 12-megapixels by default. When reviewing the View 20, we found that photos taken with AI enabled had better details and colours. For this comparison, we took photos with AI enabled, while the OnePlus 6T which lacks AI was left in its Auto mode. 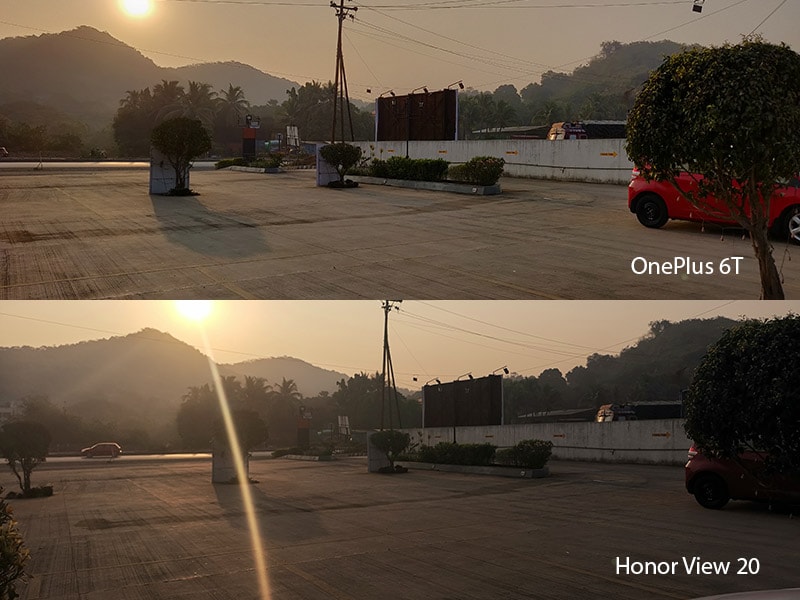 OnePlus 6T manages the exposure better than the Honor View 20

When taking landscape shots we found that the OnePlus 6T could meter light and set the exposure better. Photos also had slightly better details in the shadows. However, the Honor View 20 can take advantage of its 48-megapixel sensor when shooting at full resolution to deliver better details. 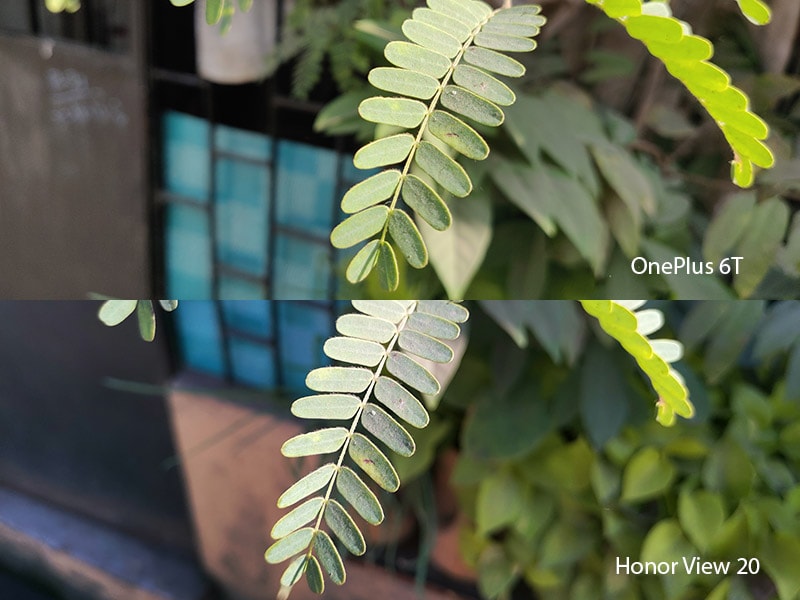 In macros, it was harder to choose between the two. Photos taken with he OnePlus 6T had well defined edges while the View 20 created a better bokeh effect. When shooting portraits, the View 20 gives you the option to put its TOF 3D camera to use. It has a cool 3D shaping feature that digitally slims a person down by squeezing the frame. The OnePlus 6T does not have such features but puts its depth sensor to use to blur backgrounds. While both smartphones have good edge detection, we found that the OnePlus 6T captured better portraits overall. 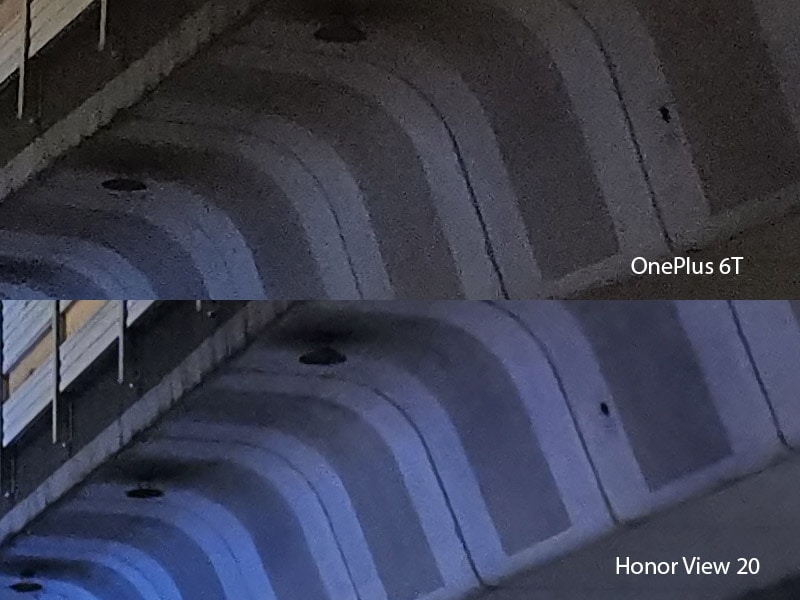 The 6T has a slightly grainy output compared to View 20

Photos taken in low light were better on the Honor View 20. Both smartphones had aggressive noise reduction leading to grainy output. The OnePlus 6T had more prominent grain in comparison, affecting the overall level of detail, which was evident on zooming in.

Selfies taken with both smartphones are good to go on social media platforms and you have the option to add different stickers and AR effects when using View 20. The OnePlus 6T managed slightly better colours compared to the View 20 though.

Video recording maxes out at 4K resolution for both these smartphones and there is a 10 minute limit on both. At 1080p, video stabilisation is available on both these devices, which helps deliver smooth, stabilised output.

Overall, the camera performance is very close, and you will notice differences only when you actively look for them.

Verdict
The OnePlus 6T (Review) and the Honor View 20 (Review) are both powerful smartphones and both are priced aggressively. Since they cost the same amount, it isn’t as easy to decide between them as it has been in some of our other comparisons. However, if you are clear as to what you need from your next smartphone, the decision will be fairly straightforward.

Honor boasts of its hole-punch display, and that gorgeous flashy back is sure to grab eyeballs. It also a useful IR emitter, a fast fingerprint scanner, a 3.5mm headphone jack, and more software features overall.

OnePlus 6T, on the other hand, delivers on quality software keeping it closer to stock Android while adding useful features and holding out the promise of software updates for a long time. It also has a better AMOLED display.

Both these smartphones offer top-of-the-line performance and good battery life. The bundled fast chargers are also convenient to top them up when required.

They are both pretty evenly matched, but if you want a more modern-looking smartphone and design ranks high on your list, the Honor View 20 should be your pick. If you want something that will age better and stay up-to-date with the latest software, you should pick up the OnePlus 6T.

Has OnePlus 6T removed the best features of the OnePlus 6? We discussed this on Orbital, our weekly technology podcast, which you can subscribe to via Apple Podcasts or RSS, download the episode, or just hit the play button below.