Xiaomi Mi A1 emits the highest level of radiation in a list of current smartphone models, followed by the OnePlus 5T, according to research conducted the German Federal Office for Radiation Protection (Bundesamt für Strahlenschutz). The list of top 16 smartphones emitting the most radiation, compiled by Statista — based on the data provided by the German body, is majorly dominated by models by Xiaomi and OnePlus, whereas Samsung phones are found to lead the range of least radiation level models. Particularly, the Samsung Galaxy Note 8 and ZTE Axon Elite have emerged as the lowest radiation-emitting phones with a specific absorption rate (SAR) of 0.17 watts per kilogram.

Xiaomi and OnePlus featured heavily in the list of phones emitting the most radiation — with eight of the top 16 handsets carrying one of their brands. However, the list also includes the iPhone 7 with an absorption rate of 1.38 watts per kilogram — just next to the OnePlus 5 that is found to have 1.39 watts per kilogram of specific absorption rate. 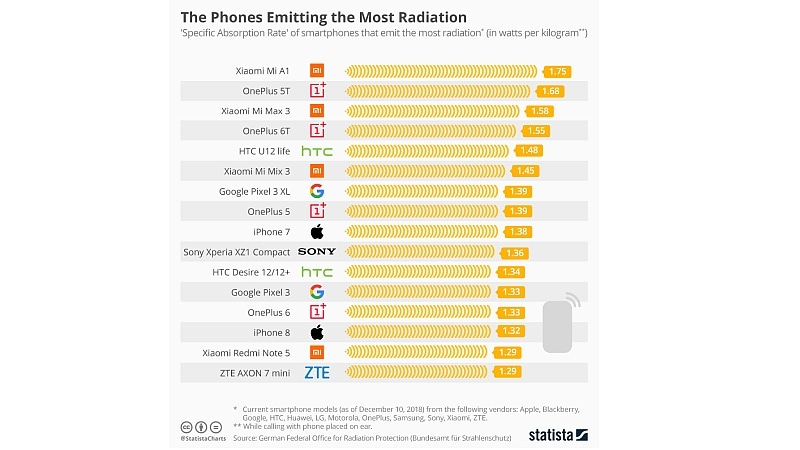 Xiaomi Mi A1 is claimed to emit the most radiation

Statista has also featured premium models, including the Google Pixel 3 XL, Pixel 3, and the Apple iPhone 8 that all emit high levels of radiation. However, there isn’t any Samsung model on the list.

In contrast, the list of phones emitting the least radiation compiled by Statista does highlight a list of Samsung models, including the Galaxy Note 8, Galaxy A8 (2018), Galaxy S8+, Galaxy S7 Edge, and Galaxy S9+. It also has models such as the ZTE Axon Elite, LG G7 ThinQ, HTC U11 Life, and Moto G5 Plus that emit significantly less radiation. 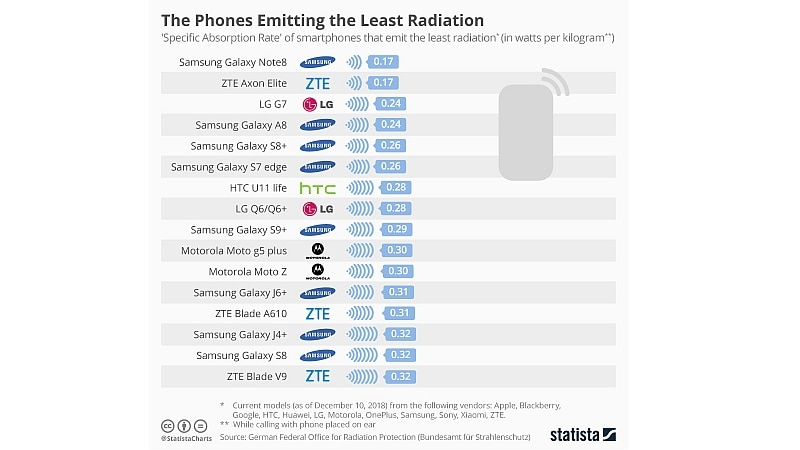 As Martin Armstrong of Statista notes in a post, there isn’t any universal guideline for a safe level of phone radiation. However, the German certification for environmental friendliness called ‘Der Blaue Engel’ (Blue Angel) only certifies models that come with a specific absorption rate of fewer than 0.60 watts per kilogram.

You can take a look at the complete database of phones made by the German Federal Office for Radiation Protection to check the level of radiation your phone emits.

Paytm Wants to Cash in on Amazon's India Distress

Disney+: What You Get for $7-a-Month Subscription

Millennials in India Are Turning to Algorithms for Love