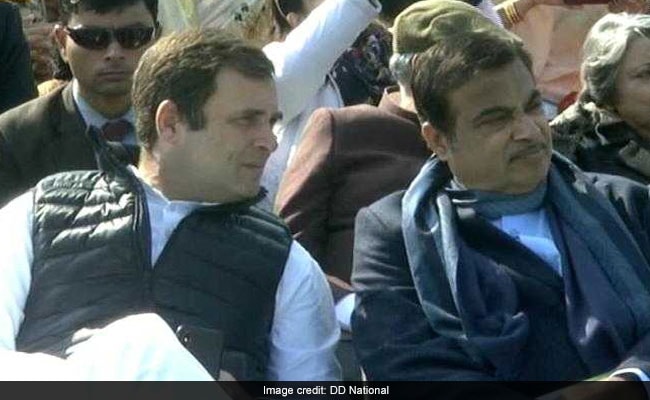 Rahul Gandhi today had a back-handed “compliment” for Union Minister Nitin Gadkari, days after their camaraderie on the sidelines of the Republic Day parade grabbed much attention. The Congress chief posted a tweet directed at Nitin Gadkari after the BJP veteran made another cryptic comment that set off speculation.

“Gadkari Ji, compliments! You are the only one in the BJP with some guts. Please also comment on: 1. The Rafale scam and Anil Ambani 2. Farmers’ distress 3. Destruction of institutions,” tweeted Rahul Gandhi, reacting to the minister’s latest.

Not long after, Mr Gadkari returned the shot. “I don’t need your certificate for my courage. But strange that despite being the president of a national party, you are having to resort to twisted media reports to target our party,” he said.

It so happened that the minister was relating an anecdote about a man who wanted to work for the BJP. He said he had closed his shop because it was not doing well, and that he had a wife and children. “I said (to him) first take care of your home, because one who cannot manage his home cannot manage the country. Hence first manage your home and look after your children properly, then work for the party and country,” Mr Gadkari had said.

The statement adds to the pile of odd comments from Mr Gadkari that are open to interpretation and leave room for speculation.

Weeks ago, he had said, speaking to top IAS and IPS officers, “if I am the party president, and my MLAs are not doing well, my MPs don’t perform, then I am responsible. What have I done to groom them.” Soon after the BJP’s defeat in state polls, the comments got a lot of traction.

At the Republic Day parade on January 26, Mr Gadkari and Mr Gandhi looked deep in conversation whenever the cameras were on the two leaders sitting in the front rows at Rajpath. The chit-chat was remarkable, given the Congress president’s almost daily attacks on the ruling BJP and the party’s equally sharp rejoinders.