As per the EUIPO’s database, Oppo’s trademark application for the ‘Find Z’ name was filed on February 2, 2019. While the trademark application does not reveal anything about the smartphone itself, it strongly suggests that Oppo’s upcoming offering will be marketed as the Find Z, at least in the European nations. Moreover, an image which is supposedly a marketing photo for the Oppo Find Z has also been leaked on Weibo courtesy of a user who goes by the name ‘Engage in machine Time’. 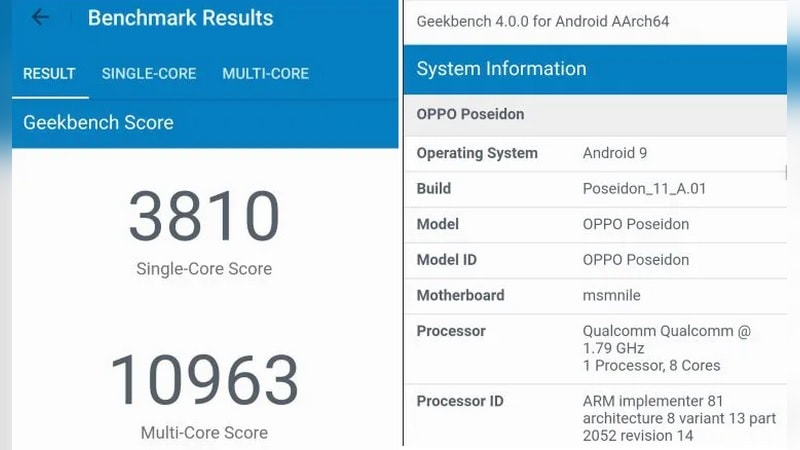 The Oppo Find Z will reportedly be powered by the Snapdragon 855 SoC
Photo Credit: 91Mobiles

Additionally, an upcoming Oppo smartphone powered by the Snapdragon 855 SoC was reportedly spotted on Geekbench with the name ‘Oppo Poseidon’. The Oppo Poseidon is allegedly the codename for the Oppo Find Z, although there is no official confirmation regarding the same. As per a previous report, the Find Z might come with features such as the company’s own 10X hybrid optical zoom technology, a dedicated night photography mode, and a Time of Flight (ToF) 3D camera for more accurate depth assessment.

The Find Z is also expected to feature an advanced in-display fingerprint sensor with a larger active area, something which the Chinese smartphone maker showcased earlier this year. The Find Z might also feature a hole-punch camera and will reportedly do away with the slide-out camera mechanism of its predecessor, the Oppo Find X. The Oppo Find Z was rumoured to arrive in June later this year, but with Oppo scheduling an event on February 23 ahead MWC 2019, we expect the company to shed some details regarding the Find Z or unveil the new Find series flagship.