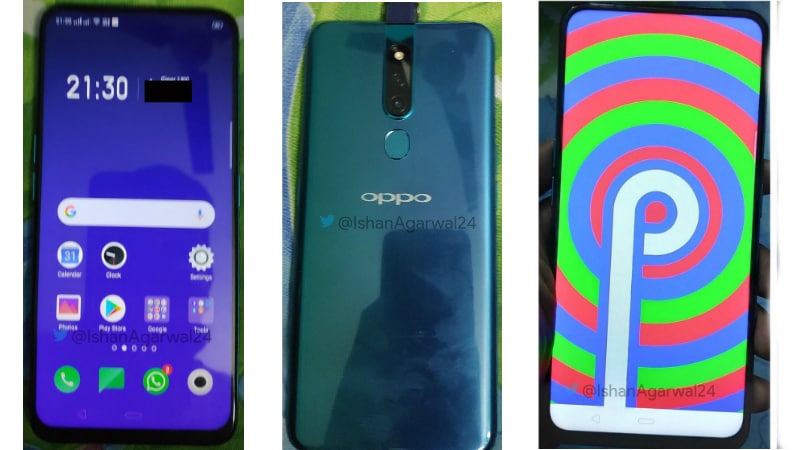 Oppo is apparently working on a new phone that comes with a similar pop-up selfie camera that the Vivo Nex series is famous for. Fresh photo leak suggests that an upcoming Oppo phone will sport a pop-up selfie camera, a dual camera setup, a rear fingerprint sensor, and will run on ColorOS 6.0 based on Android Pie. The new Oppo phone is tipped to either be the Oppo R19 or the Oppo F11. These photos show the phone from the front and back, revealing all design details.

Tipster Ishan Agarwal has published these photos on Twitter, and the photos suggest that the phone will sport a pop-up selfie camera. The selfie camera is placed on the top edge, but comes out from the centre, and not from the right side – as is the case with Vivo Nex. Because of this, the Oppo device is all display up front, with a slight chin at the bottom edge of the smartphone.

The phone sports a glossy reflective back panel, a dual camera setup aligned vertically, and a rear fingerprint sensor sitting beneath it. The SIM tray is also removed and it is seen to offer hybrid dual-SIM support. The tipster suggests that the device may be called the Oppo R19 or the Oppo F11.

These new images could most likely be of the Oppo R19 as a previous report also suggests that the smartphone will come with a pop-up selfie camera jutting out from the top-centre. However, the report also said that the Oppo R19 will sport an in-display fingerprint sensor, which isn’t the case in the recent photos.

Though no definite dates have been announced by either manufacturer, the Oppo R19 is expected to debut sometime in March. We recommend you take all leaks with a pinch of salt, till official details from Oppo are out.