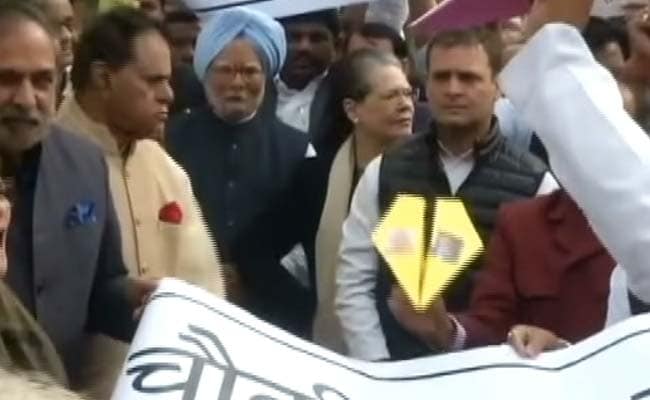 The Congress leaders raised slogans against the Prime Minister Narendra Modi’s government ahead of the tabling of a report by national auditor, the Comptroller and Auditor General (CAG), in parliament today. Rahul Gandhi had slammed the CAG report, calling it “Chowkidar (gatekeeper) Auditor General” report. Sources say that the report doesn’t mention the prices of the jets as the government called it classified information.

Mr Gandhi stepped up his attack on PM Modi again today with a tweet. He will address the media at 3:30 pm.

The PM defended his personal RAFALE bypass deal on 2 counts :

Both have been demolished by the revelations in the Hindu today.

Watch my LIVE Press Conference on the #RafaleScam at 3.30 PM today. https://t.co/IzyCaHeyIM

Yesterday, Rahul Gandhi had alleged that PM Modi is “acting as Anil Ambani’s middleman”, citing an email that he said revealed the industrialist had visited Paris and met with the French Defence Minister 10 days before PM Modi went there and announced the 36-jet deal with France.

Anil Ambani’s Reliance Defence said in a statement that “facts are being deliberately twisted and reality being ignored” and that the visit had nothing to do with Rafale. A spokesperson says the industrialist visited France to discuss a deal for more than 100 Naval Utility Helicopters for which the government had sought information from international helicopter manufacturers in 2015.

The Supreme Court in December refused to investigate the deal worth an alleged 8.7 billion dollars and rejected petitions that alleged corruption, including the choice of Anil Ambani’s firm as domestic partner. But the opposition says the government concealed vital information.