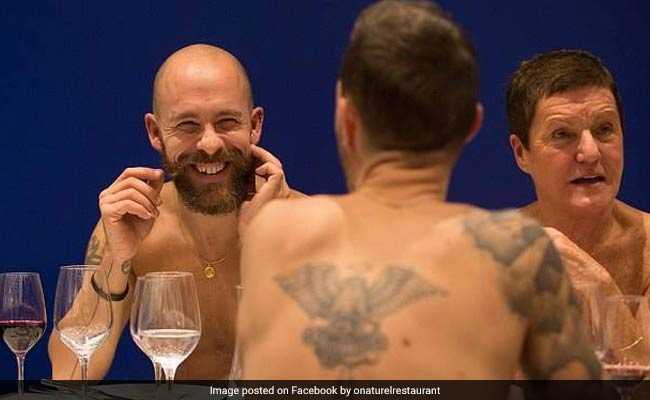 Host at O’naturel in Paris to couple: “May I take your coats?”

Husband: “Yes, that would be perfect. Thank you.”

Host (trying to sound dignified): “May I take your skirt, blouse, shirt and pants, too?”

Host (trying not to stare): “And may I take your undergarments?”

Husband (stealing his clothes back from the host and fleeing to the nearest restroom): “I can’t do it! I can’t eat dinner wearing only a napkin on my lap!”

As far as I know, no such scene has ever taken place at O’naturel, the first full-time nudist restaurant in Paris, a city known for accommodating those who let it all hang out. But some kind of fear has kept diners away from O’naturel because the place will soon become the first full-time nudist restaurant in Paris to kiss its – well, you know what – goodbye.

The owners recently announced that O’naturel would bid au revoir on Feb. 16, after a 15-month run in the City of Light. As to the cause of the closure, the New York Post may have stated it most succinctly: The restaurant couldn’t put “butts in seats.”

“We’re shutting down because we didn’t have enough clients. We would have preferred this adventure to go on for longer,” the founders, Mike and Stephane Saada, told The Guardian in a statement.

The Saadas are twin brothers who opened O’naturel in November 2017. They’re not nudists themselves, according to an article published shortly after the restaurant opened, but they supposedly knew how to exploit an opening in the naturism market. Nudists in Paris could visit museums, go bowling and go swimming. But they had no full-time restaurant to call their own until O’naturel revealed itself.

There are rules, of course, to dining at O’naturel, where the snails are sauced but the diners are naked. Patrons undress in a cloakroom, where they must leave their clothes and their phones/cameras. The latter is insurance that no unwanted photos find their way onto the internet. (Sure enough, the restaurant’s TripAdvisor page has exactly zero photos – and only five reviews and two comments, which may tell you something about the place’s draw.) The servers and cooks, I should note, remain fully clothed here, as required by health codes and by every diner who doesn’t want to guess the origin of the hair in their soup.

The brothers try to screen customers before they ever set foot in the restaurant, to better keep the voyeurs and pickup artists at bay. “We might reject someone, or explain to them that if they’re looking to hook up, they should go somewhere else,” Stephane told the Local France.

Even with the apparently growing population of nudists in France, it’s not difficult to imagine that O’naturel had a small pool (hot tub?) of patrons to draw from: those who feel comfortable dining in the altogether. Naturists typically identify with the freedom associated with shedding their clothes, which liberates them from the usual markers of class, fashion and trends. Or they may see naturism as a kind of feminist statement – to walk naked without the unwanted attention of the male gaze – or even as a comment on our lost connection to the natural world.

I mean, there could be 101 reasons O’naturel is going toes up, such as:

No one could stomach the guy who belted out Radiohead’s “Creep” during Nude Karaoke Nights.

No one wanted to bend over to fetch a dropped napkin.

Owners couldn’t find anyone to clean the black seat covers, which were changed between seatings.

Provide your own joke here.

* Yes, yes, we know. This scene would have played out in French. Consider the above just another sloppy American remake of a great French-language film.