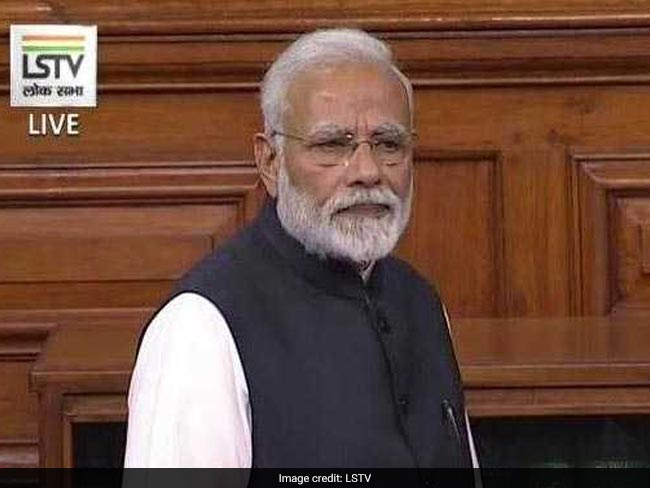 Prime Minister Narendra Modi is replying to the debate on the motion of thanks to the president’s address in the Lok Sabha today. The discussion started yesterday and the motion is likely to be adopted by the House, where the ruling NDA has a big majority, tomorrow, following the prime minister’s reply. The BJP has issued a whip asking its members to be present in the House today and the day after.

The debate on the motion of thanks to President Ram Nath Kovind’s address to the joint sitting of the two Houses of Parliament on the opening day of the Budget Session began yesterday. It was initiated by the BJP’s chief whip Rakesh Singh.

President Ram Nath Kovind addressed a joint sitting of the Lok Sabha and the Rajya Sabha on January 31 — when the budget session began.

On the fourth day of the Parliament’s Budget Session today, the Rajya Sabha was adjourned for the day over faculty reservation issue in universities.

Here are the LIVE updates from Budget Session of Parliament:

18:55 (IST)
“Three lakh fraud companies were shut down due to demonetisation,” says PM Modi.
18:51 (IST)
PM Modi on Rafale Deal allegations:
“(Defence Minister) Nirmala Sithraman answered each allegation made by the Congress. Congress does not want that our country’s air force be strengthened. Which company are you bidding for by fighting on Rafale deal?”
“I want to say it on the floor of the Parliament that the Indian National Congress does not want our armed forces to be strong.”
“They do not want our security apparatus to be strong.”
“On Rafale, I used to think that they even lie with confidence. They have accepted the fact that in the last 55 years, no big deal has been signed without a middleman,” he adds.
“We don’t have any baggage. We are working tirelessly to bring the corrupt people to book.”
18:46 (IST)
“The phone banking of the UPA did wonders for the friends of their leaders. Due to such favouritism, our banking system witnessed many problems,” says PM Modi.
18:41 (IST)
PM Modi Attacks Congress In Lok Sabha
PM Modi says: “When the commonwealth games were held, it was an opportunity for us to highlight the glory of our nation. But these people (Congress/UPA) were rather focussed on increasing their own wealth.”
“We gave Rs 7 Lakh Crore under Mudra Yojana,” he adds.
“There were days (under the Congress) when even bullet proof jackets were not available for the army. And then they talk about surgical strike.”
“In 2016, more than 1 lakh bullet proof jackets were provided by us,” PM Modi adds.
18:33 (IST)
The grand alliance is adulterated: PM Modi in Lok Sabha.
18:28 (IST)
“In 55 years, 12 crore gas connection were given. In last 55 months, 13 crore gas connections were given and 6 crore were Ujjwala. The speed of the work done and for whom the work was done, you decide for yourself,” says PM Modi in Lok Sabha.
“In all three manifestos, you (Congress) said within 3 years, every household will have electricity. I am worried that Congress keeps saying: Gareebi Hatao. However, in all three manifestos, they made the same promise but the work is being done by me now,” he adds.
18:24 (IST)
Before raising a finger at Modi, you should know that rest of the four fingers are pointing at you: PM Modi, referring to Congress.
“Do you know what is my crime for them (Congress)? That a person born to a poor family is challenging their Sultunate,” he adds.
18:20 (IST)
The Congress has tarnished the Indian Army’s honour: PM Modi in Lok Sabha.
“The Congress has blamed their defeat in elections on EVMs. It called planning commission a ‘bunch of jokers’. “You dismissed elected governments. Indira Gandhi did this over 50 times. She dismissed elected governments.”
18:15 (IST)
“India is seeing remarkable progress in the last four years,” PM Modi says.
“In all spheres, investment, steel sector, start ups, milk and agriculture, aviation, India’s progress is outstanding.”
You are allowed to criticise Modi. You are also free to BJP. But in dpoing that, many people start criticisng India: PM Modi.
“That is why their (Congress) leaders go to London and do press conferences to show India in bad light,” he adds.
18:12 (IST)
We are not those who run away from challenges. We face the challenges and are working with all our strength to fulfill people’s aspirations: PM Modi.
“Our friends in the Congress see things in two time periods: BC — Before Congress, when nothing happened. AD: After Dynasty — where everything happened.”
18:08 (IST)
PM Modi says: “There has been criticism, there were baseless claims. But i think, since this is an election year, people are compelled to say something.”
“Those born in the 21st century are now going to be voters and thus, they will play a role in shaping India’s progress.”
“There will be many critics but  there are few who pledge to bring about a change,” PM Modi says.
18:06 (IST)
PM Modi begins address in Lok Sabha:
This year, the way the President has acknowledged government’s efforts… as the head of the government, I am thankful to him: PM Modi.
“A government has to work for the people of India, a Government has to be sensitive to people’s aspirations. There is no room for corruption,” he adds.
18:03 (IST)
PM Modi addresses Lok Sabha.
17:57 (IST)
Prime Minister Narendra Modi reaches Lok Sabha. He is expected to address the session shortly.
17:22 (IST)
NDA ally Shiv Sena says it is being given “step-motherly” treatment by senior partner BJP which has led to questions about its continuance
in the alliance.
Participating in the debate on the motion of thanks to the President’s address in Lok Sabha, Shiv Sena leader Anandrao Adsul chose to vent out his party’s grievances against the BJP and said while the NDA government at the Centre has done several commendable works, some mistakes have also been committed.
15:22 (IST)
The Rajya Sabha has been adjourned for the day amid sloganeering by the opposition soon after it met at 2 pm after an earlier adjournment. As the House resumed discussion on the motion of thanks on the President’s address, a number of opposition MPs came near the Chair’s podium and started shouting slogans against the government.
Chairman M Venkaiah Naidu adjourned the House for the day after his appeal for restoring order in the House and resume the discussion was ignored by the agitating members.