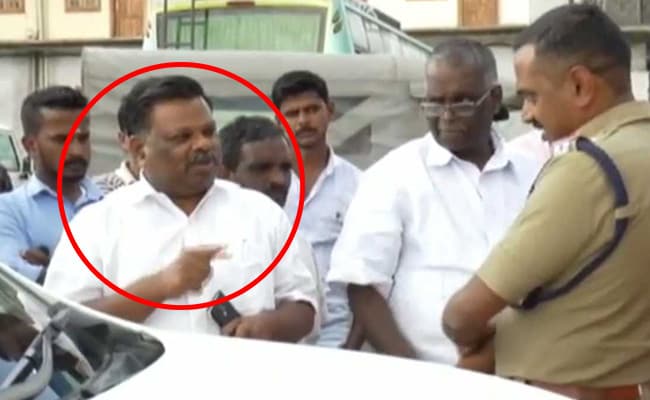 Weeks after lakhs of women were rallied by the Left government in Kerala to showcase the state’s progressive history, a Left party lawmaker was seen bad-mouthing a young woman Indian Administrative Service (IAS) officer for doing her job.

Communist Party of India (Marxist) or CPM legislator S Rajendran from Devikulam insulted a sub-collector in the hill town of Devikulam, in full public view and in front of her officers, calling her “brainless, without any common sense”.

IAS officer Renu Raj, 30, is the first woman sub-collector of Devikulam, a part of Idukki – popular with tourists but also infamous for illegal constructions and land encroachments.

Infuriated by the sub-collector’s “stop memo” against a construction project by the Left-run panchayat, S Rajendran said: “It’s for the first time that the government is asking for an explanation from the government itself. I have not seen such over smart people before. Building rules are to be seen by the panchayat. Not by her. She needs to study and learn. Such people without any common sense and brains are sent here.” This was caught on camera.

The sub-collector was not present at the venue, but she was informed about it by other officers. The footage accessed by NDTV is the edited version.

According to a 2010 order of the Kerala High Court, any construction work at seven villages of Munnar needs a no-objection certificate (NOC) from the revenue authorities, due to ecological concerns. According to top sources, the “stop memo” was issued because the NOC was not obtained.

“The high court has sent me a directive to file a report in relation to this particular construction, which is now a contempt of court. I have also filed reports with the chief secretary and the revenue secretary on the violation of court order as well as the opposition I faced for doing my duty,” the young IAS officer told NDTV.

“Despite how the MLA behaved in front of my officers, I have received tremendous support from my seniors, from the media and political leaders. I am certain I have done the right thing. I will continue to do my duty, in accordance to my post, no matter what it takes,” Renu Raj said.

“She did feel demoralised initially, but has been determined to do her job well, after all the support that poured in,” a source close to the bureaucrat told NDTV.

Opposition leader Ramesh Chennithala has hit out at the CPM legislator for his comments. “S Rajendran’s action is below standard and not suitable for an elected representative.”