​Manchester City manager Pep Guardiola has levelled a not-so-sly dig at Jurgen Klopp’s handling of Liverpool’s domestic cup affairs, claiming he likes to go “as far as possible” in all four competitions.

The Reds’ 2-1 loss to Wolves at Molineux in the FA Cup was the second time they’ve exited a cup competition at the first time of asking, following the EFL Cup defeat to Chelsea at Anfield in September. 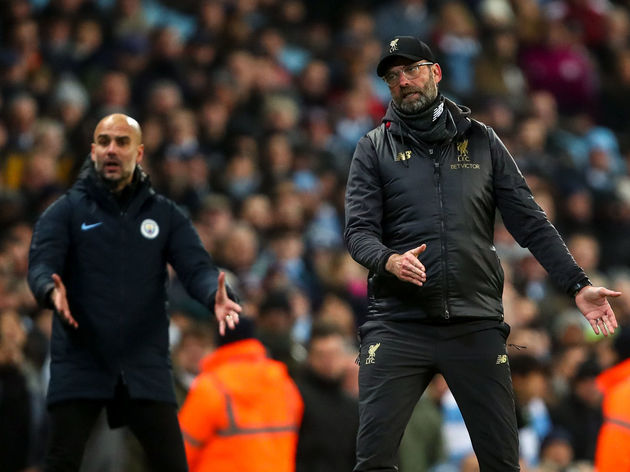 It also ensured Liverpool of back to back defeats of the same scoreline, following the frenetic 2-1 beating they took at the Etihad when facing Guardiola’s side last week in the Premier League. That cut their lead over the Citizens at the top of the table to just four points.

Jamie Carragher claimed on Monday night that his former side’s cup exit gave them a better chance in the league, but speaking ahead of his side’s League Cup semi final 1st leg with Burton, as quoted by the ​Metro, the Spaniard proclaimed: “I don’t know [if fewer games gives Liverpool an advantage] – I don’t have a theory from my experience about that.”

“If everyone is fit and not injured we can cope with it. The problem is if you have 10 injured players, then it’s almost impossible.”

​City backed up that League win with a 7-0 demolition job over Rotherham in the esteemed Cup competition, and Guardiola confirmed: “I prefer it [being involved in four competitions], definitely. I like to be in the four competitions as far as possible. When Wigan put us out of the FA Cup last season I was sad. I take the cups seriously.

 “The charisma, the winning, it is incredible. He is one of the best central defenders I have ever seen.” – Guardiola on Kompany.

“I’m not involved in what my opponents do. The reality for Jurgen [Klopp] is he knows exactly what happened.

“For his part, the ​Liverpool boss seemed to accept the responsibility for the exit, admitting after the game: “There were not a lot of good decisions from me – that’s how the days are sometimes.”

My husband doesn't like to get intimate with me