Prime Minister Narendra Modi, who is leading the Bharatiya Janata Party’s campaign blitzkrieg ahead of this year’s Lok Sabha election, is set for a whirlwind tour of Assam, Arunachal Pradesh and Tripura today. Giving impetus to the BJP’s Lok Sabha election campaign, PM Modi’s visit to the three northeastern states today is part of his ten-state visit in just five days.

During his visit to Assam, Arunachal and Tripura, Prime Minister Modi is scheduled to inaugurate several projects and address multiple rallies.

The prime minister will begin his visit to the northeast by laying the foundation of a greenfield airport at Hollongi in Parum Pare district of Arunachal Pradesh shortly after 10 am. PM Modi will also launch work for a strategic tunnel in Sela, which will reduce travel time to the India-China border town of Tawang by over an hour. The airport will not only boost the region’s connectivity and economic growth, but will also be of strategic importance.

In Guwahati, PM Modi is scheduled to lay the foundation of a six-lane bridge over the river Brahmaputra and kick-off construction work of an All India Institute of Medical Sciences or AIIMS – India’s premier hospital and medical research facility – at Changsari, which is approximately 22 kilometers from Guwahati.

The prime minister will also inaugurate the Numaligarh Refinery’s bio-diesel plant and the Barauni-Guwahati gas pipeline – two key energy projects for the state. These pipelines, connecting northeast with the national gas grid, will not only meet the fuel requirement of industries, but also supply CNG for automobiles and cooking gas to households.

In Arunachal Pradesh, the prime minister will launch a new, dedicated Doordarshan channel for the state, aptly named ‘DD Arun Prabha’. PM Modi will also dedicate the 110 MW Pare hydroelectric power plant to the nation. Apart from this, he will lay the foundation stone for a permanent campus of the prestigious Film and Television Institute of India at Jote and inaugurate the upgraded Tezu Airport.

In Assam, PM Modi will lay the foundation stone of Northeast Gas Grid which will lead to uninterrupted supply of natural gas across the northeast. He will also inaugurate a gas processing plant in Tinsukia and an LPG capacity augmentation of mounted storage vessel in Guwahati. The prime minister will also lay the foundation stone of NRL bio-refinery at Numaligarh, as well as the 729-km long Barauni-Guwahati gas pipeline.

In Tripura, PM Modi will dedicate the Garjee-Belonia railway line to the nation by unveiling a plaque. He will also inaugurate the new complex of the Tripura Institute of Technology and unveil the statue of Maharaja Bir Bikram Kishore Manikya Bahadur at Maharaja Bir Bikram Airport in Agartala.

However, PM Modi is also facing resistance by activists in the northeastern states over the controversial Citizenship (Amendment) Bill, which commits to providing Indian citizenship and full constitutional rights to non-Muslims who came and settled in India after facing persecution in neighbouring countries like Bangladesh, Pakistan and Afghanistan. Though the bill has provisions for Hindus, Buddhists, Jains, Sikhs and Christians, it does not include Muslims. This decision by the Centre has led to allegations of religious discrimination from rights activists as well as political parties. 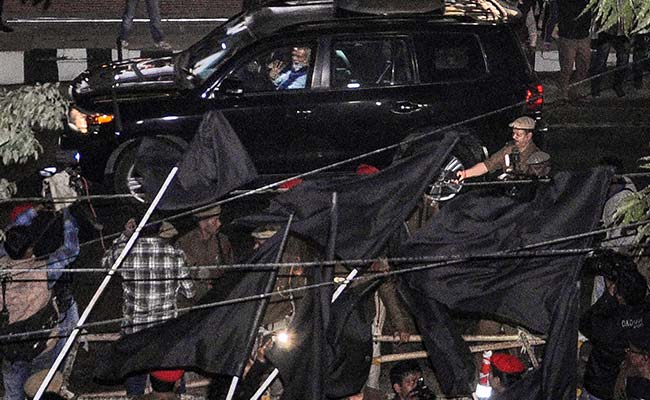 Shortly after landing in Guwahati last night, Prime Minister Modi was greeted with black flags and angry activists protesting the Citizenship (Amendment) Bill. Several civil society groups across the northeast – including the All Assam Students Union or AASU – have decided to intensify their ongoing agitation. Slogans of “Narendra Modi, Go Back” were heard as activists stood by the roads waving black flags as PM Modi’s motorcade was heading to Raj Bhawan from the airport last evening.

Agitations have also intensified across Nagaland and Manipur, with several civil society groups as well as regional parties calling for a boycott of the prime minister’s tour of the region.

The Asom Gana Parishad – the BJP’s former alliance partner in Assam – also took out a massive torchlight march against the controversial bill on Friday evening.