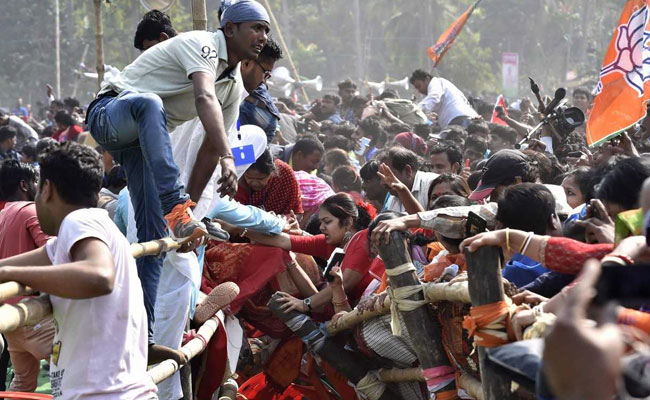 Prime Minister Narendra Modi cut short his speech at a rally in North 24 Parganas district on Saturday after a stampede-like situation broke out at the venue in which many people were injured.

While PM Modi was addressing the rally of the Matua community, hundreds of supporters, who were standing outside the venue tried to barge into the inner ring of the rally ground, leading to the commotion.

The hue and cry resulted in a security scare and senior police and SPG officials tried to stop people from crossing the barricade and enter the no-man’s security zone.

Later, police officials formed a human chain to stop people from going near the stage, from where the prime minster was addressing the crowd.

PM Modi tried to pacify the crowd by asking them to stay put in their places and stop trying to come to the front of the inner ring.

However, his pleas went unheard as supporters started throwing chairs inside the no-man’s zone in front of the stage to make space for others to stand in the inner ring, which was earmarked for women.

Following the commotion, PM Modi abruptly cut short his speech, saying he has another rally to attend and decided to leave the venue.

Several women and children fainted during the stampede-like situation and were rushed to the hospital for primary treatment, the police officer said.

Some children, who had lost their parents due to commotion, were taken to a nearby help desk. They were later handed over to their parents.

The state BJP leadership, however, claimed that only a few people were injured.

“Very few people were injured. They sustained minor injuries. One person was taken to the hospital and was released after primary treatment,” BJP state general secretary Pratap Banerjee said.

Slamming the BJP, TMC North 24 Paraganas district president Jyotipriyo Mullick said, “Those who can’t organise a rally in a disciplined manner should stop dreaming of conquering Bengal. The people of Bengal stand with Mamata Banerjee.”

The Trinamool Congress has decided to take out a protest march near the site of the prime minister’s rally on Saturday evening wearing black masks.